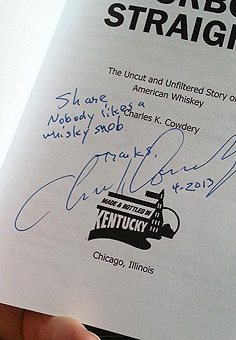 My blog’s title, How to Drink Whisky, is a tongue in cheek joke, and at times, a satirical theme. I’ve heard so many people say things like “only a jerk would tell someone how to drink their whisky,” that I chose that phrase in jest, to mock them, the Chuck Cowderys of the world who use the word snob to deride people. After all, if you don’t like someone’s opinion enough to label them so derisively, are you not as guilty of snobbish opinion-posturing as they are? Calling anybody a snob is an ironic exercise in meta-snobbery. Oh, so that person over there is vocal about being picky and you feel like lording over people that way is wrong? Perhaps lording over them about their pickiness will take care of that disparity for you.

It’s true that for many people whisky is simply a status. I love the stuff but, personally, I’m not on-board with the status part. I will try an $8 bottle as quickly as a $100 bottle, any style, any age, any proof, blended or not. It needs to be said though, that if someone wants to buy whisky for the status, it’s okay. That’s their right to ignore the delicious pantheon of whisky laid out before them and only buy single malts. It’s fine if they think Bourbon is the only whisky bold enough to satisfy their spirit-lust. It’s alright if they refuse to drink anything blended. Take a deep breath, meta-snobs. It’s okay.

Perhaps the most famous example of meta-snobbery happens during the argument about chilling whisky with ice or stones. There are plenty of justifications as to why you shouldn’t, but for some reason the cry for freedom trumps all courtesy, and people who like cold whisky will often act like you just pushed their kid off of a subway platform for mentioning that cold and whisky don’t mix. I have been called a snob more times than I can count for saying so. 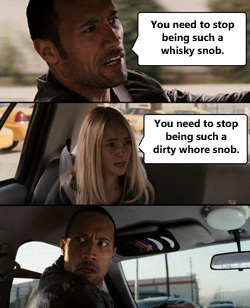 If we were talking about cooking and I were to tell you that salt can increase the receptive nature of your electrolytic taste buds, making your spaghetti sauce taste better, are you going to call me a sauce-snob? Are Buddhists really just moment-snobs for trying to squeeze the most enjoyment out of each minute of their life by meditating? Are science teachers fact-snobs? Or better yet, consider this: if you saw your neighbor shoveling snow with a garden trowel, would telling them about snow-shovels make you a shovel-snob? You can still shovel your snow any way you’d like, just don’t call me a snob for pointing out that I think there’s a better way to do it. I would actually argue that only a jerk would watch a neighbor struggle like that, even if it turns out that they’re enjoying the labor.

That breed of anti-intellectualism is the very same that locked Galileo up for suggesting a heliocentric solar system. It caused mathematically literate women and strong swimmers to be burned as witches. It bans books and destroys art. Promoting ignorance on the grounds that your personal preference is too sacred to question will inevitably lead you awry, no matter which variety of the word freedom you use to try and justify it.

That’s not to say that there aren’t folks who are too loud for their own good on both sides of any argument or that anyone should ever legislate how you drink your whisky. In fact, you should experiment. You should try everything at least once. Live a little, but don’t be offended when someone points out that you just squashed all the trademark spice in that $100 bottle of Talisker by icing it down, or that Bourbon prides itself on being bolder and heartier so adding ice is, metaphorically, cutting off its balls. Ultimately, if you want to drink some watery eunuch of a spirit, that’s your prerogative as much as it’s mine to say I don’t like it. I like talking about whisky, but if all you can say is that Woodford Reserve on the rocks is wicked smooth then I’m afraid we don’t have much else to talk about other than ice and whisky.

(For the record, you can buy Mr. Cowdery’s book, the one you see signed at the beginning of this post, on his website here. You can also ask him, as I did, to inscribe it any way you wish…)