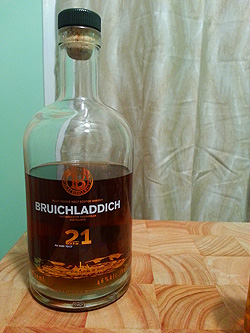 This is just one of the many chapters in the discontinued-hero saga written by Bruichladdich in the early 21st century.You may find a few stragglers somewhere, but soon they will be no more, so if you want to find out what really happened to the Laddie Gorgon in chapter 21 then you’d better get to finding a bottle quickly. Don’t fret too much if you can’t find any, though. There are many other very interesting and delicious releases left in the distiller’s portfolio.

This single malt is a dark and heavy spirit with Oloroso sherry casks mostly dominating its lighter side. There are clashing moments when it becomes lively with fruit and others when it will turn you to stone for looking at it. It’s like a beautiful lady you fancy… who farts frequently and unapologetically; a heaping dose of whisky reality. 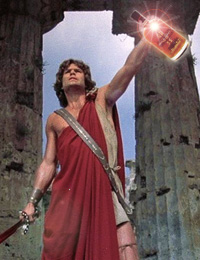 Nose: Sherry, sulfur candles, shrimp skins and flame-licked steak. Graham cracker and farmy cider doughnuts. Dusty like the plume from a car driving too fast down a dirt road. A few minutes after the dust settles, the esters pick up and you get a blast of figs, heather, and Midori. Fireball candies and star magnolia ride over sweet malt before getting in a fight with a few lost citronella candles and a very ripe pineapple. Eventually the fruit dies down again, leaving rubbery detritus, giant scorpions and leather polish in its wake.

Palate: The sulfur and figs are first, followed by latigo leather, tobacco and black pepper. Cumin, coal smoke and cinnamon with bouts of nutmeg, clove and allspice. Hints of York Peppermint Pattie and bug-spray make cameos. A roadside fruit vendor banished to the center of a winding, stone-dungeon corridor. After the fruit vendor is slain, the finish will light a meaty ember that grows into a full chest’s worth of dimly-lit, cherry-scented, paneled drawing room.

If you’re looking for light, easy malt, move along kid. This one’s for big boys and girls. Serve this with a nice hunk of seared red meat.