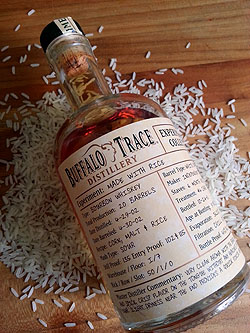 This is a Bourbon mash padded with rice instead of rye or wheat. Like all of Buffalo Trace’s Experimental Collection, the label lays out lots of details about the spirit’s creation, including stave drying time, evaporation rate, and barrel entry proof. Very cool.

The official tasting notes on this one’s label are a little puzzling to me, though. The very first line which states “Very clean aroma,” loses me right away. Anyone who’s smelled rice spirit knows it’s anything but clean. Rice is a funky grain that often distills out to become a vinegary sewer of a spirit. This Bourbon is rather light overall, but that rice funk is here in spades. Anyone nosing this next to a classic Buffalo Trace bottling would know right away what rice offers to the spirit… which is precisely where this whisky starts to shine.

This is one of the few “experimental” whiskies that I didn’t immediately regret buying when I opened it. It’s probably not going to quench your Bourbon thirst if that’s what ails you; it’s a little alien, but if you’re looking for some cerebral drinking then this might just scratch that itch. Judging by the exorbitant price, I would say that’s the market they were probably going after when they released this one. It’s definitely not meant to be a day-to-day whisky. This is a bottle that you open once and then wait for your nerdiest whisky friends to come over and sample.

Nose: At first, it’s bright and sweet with bubblegum and pop rocks. Carrots and medicated vanillin start to take the aroma in a different direction. Then it becomes porkish, like the pig-fart smell a chemically treated pork shoulder from an industrial scale farm gives off when you boil it, with other weirdly funky undertones, like bamboo salt.

Palate: First sip is like sucking on the tape from a cassette. Eventually, the palate settles down into something sweeter and slightly more classical but it stays slightly bitter and woody. Loads of caramel. Light orange candy in the finish.

Again, this is not an everyday whisky. The word Bourbon on the label will lead you down an alleyway booby trapped with expectations. You need to ignore those little voices telling you what to want from the spirit and let the drink tell you what it is, instead. If you can manage that, then this $60 350mL half-bottle may just make an interesting addition to your whisky shelf.

2 thoughts on “Buffalo Trace Experimental Collection – Made with Rice (45%)”