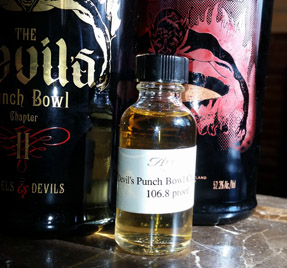 And now, regrettably, we come to the conclusion of the Devil’s Punchbowl trilogy. Saying I’m going to miss this series, would be a colossal understatement.

Chapter I took us to the edge of what Arran is capable of; a zesty islander, with tons of malt, pepper and just the right amount of peat and spice. Chapter II, Angels & Devils, brought us a slightly toned down pepper, with a hefty dose of sherry added to the mix. Chapter III leaves out the peat completely, and substitutes the missing casks with French Oak barriques (a barrique is, more or less, what wine makers call their barrel sized casks).

I think the third’s packaging artwork is the coolest of the three, though the disappearance of the dates of the casks is unfortunate. If there were one criticism of the series I could voice, it would be that Arran had a terrific opportunity to open conversations about age statements, but caved to marketing pressures. This is a delicious malt, and worth every penny of the ~$130 it sold for.

Nose: The apricots have evolved into juicy peaches marinated in white ver jus. Grapefruit zest and coconut along with the sweet hay we’ve come to expect. More wood with more elegance than the other two chapters. Digging a little deeper I find chocolate syrup and green lime gummy bears. No peat in this one, so the nose is deliciously clean and mouth watering.

Palate: Ver jus sweetness kicks off with the extreme malt and hay that hallmarks the series. The sweet notes balance the peppery notes toning the fire down despite Chapter III having the highest proof of the three. The tart grapes are a perfect balance to the extra wood. Pears in syrup, gentle cinnamon, and Golden Grahams. Slight wine and a loooong finish.

Chapter III, The Fiendish Finale, is easily my favorite of the three. If you find a bottle on a shelf, you should immediately ask yourself WWTDD; What Would The Devil Drink? It would be supple, fiery, addictive and powerful. This is it.

Many thanks to ImPex Beverages for the sample!

While taking down my notes for the Devil’s Punchbowl series, I found myself exploring my old CD collection for bands I had forgotten; bands that might inspire the evil in these whiskies to fully manifest while I wrote.

Looking for the darkest band I could find, my first stop was Type O Negative. After a few minutes, I felt like they were too obvious a choice. Plus, I had too much fun at Type O shows. Pete Steel was a legend, but staple my hand to my forehead for me, Type O just wasn’t evil enough.

On through the next most obvious choices, I poured over Skinny Puppy. I forgot they were Canadian. Too polite. Nine Inch Nails? Despite an awesome sweet spot between their second and third albums, too commercial. GG Allin? Well, he was certainly terrible enough musically, but I’m not sure shoving a banana up your ass and playing with your poop on stage is evil so much as crazy. Lonestar? Just kidding… I don’t own a Lonestar CD.

How about King 810? They’re from Flint Michigan. That’s pretty brutal. The video for their song Killem All is pretty gruesome, too, and leaves me with an empty feeling inside. So far so good. After a few minutes though, I feel like they were just screaming over watered down Pantera riffs, and let’s never forget how Pantera started.

Eventually, I found myself skipping through Throbbing Gristle tracks. The complete chaos and abject terror songs like We Hate You (Little Girls) dump into your soul was inspiring enough. I was definitely getting closer, but I almost felt like Throbbing Gristle was too nerdy an outfit to be the most evil one I could find. Also, I couldn’t really concentrate while it was playing.

Then I stumbled on the last stack of CD’s I listened to; the ones I never shuffled back into their respective spots, rather left at the end of the collection in a pile of sloth. The last CD in the stack was perfect. A band so brutal that the lead singer, stage named Dead, slit his wrists and throat before shooting himself in the face with a shotgun. Ever the thoughtful gent, and realizing the messy affair he was about to leave behind in his band mates’ home, he made sure to leave a note. It began with a casual “Excuse the blood…”. Now that’s dark, but it gets worse.

The guitarist who found the body first, Eronymous, ran out to the store for a disposable camera so he could stage some pictures with the body before alerting authorities. One of the pictures became the cover of a concert bootleg. Eronymous also kept a few pieces of Dead’s skull and made jewelry out of them to give to other bands he liked.

After that, Eronymous and bassist Varg Vikernes burned down a few churches together for, I dunno, fun? Varg Vikernes would later stab Eronymous to death outside his home before going to prison for the arson and murder.

So, the band was definitely evil enough. The music was simple enough, without much skill or critical thinking involved. Plus, it was a pioneering force in the most paradoxically evil and hilarious genre of all… Norwegian Black Metal. Yes. This was definitely it. The whole package. Mayhem.

In deference, I have written my notes for the second chapter using lyrics from their song Freezing Moon. Feel free to follow the link above if you want to sing along.

Freezing Moon – by Mayhem with amendments by HowToDrinkWhisky.com in bold 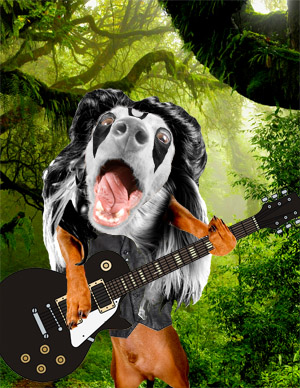 This adorable fellow just finished burning down a church.

Everything here is
a little grungier than Chapters 1 and 3.
Everything here is so dark but
still has lots of the classic apricot and hay.
I remember it as from a dream,
an odd fart smell, at first,
in the nose of this bottle.

Diabolic spices float by
out from the dark sherry butts.
I remember it was here I found
some ginger powder
by following the slightly bitter finish to Hell.

It’s night again,
with a tiny bit of peat.
Night, you definitely should have washed that pot you boiled shrimp in
instead of just rinsing it.
I please my hunger on the honey of living humans.
Night of hunger, sucking on paper.
Follow its stony call.
Follow the freezing raisin moon.

Roasted peanuts are growing.
The palate opens to vacuum bags filled with pears and green apples.
The mildest pepper of the three lights up again.
As in ancient times,
falling wine vapors die behind the back of my throat
by following the freezing grainy moon.

It’s definitely my least favorite of the three Chapters, though I definitely wouldn’t turn my nose up if someone offered me a glass and I wouldn’t argue that this isn’t delicious, despite the mildly off-putting funk in the nose. The palate still shines, just maybe not as bright, as the finish stumbles a bit, too.

Thank you to the kind folks at ImpEx Beverages Inc. for the sample. Cheers!

“Midway upon the journey of our life
I found myself within a forest dark,
For the straightforward pathway had been lost.” -Dante Alighieri

My home state of Connecticut has become rotten with self-proclaimed craft brewers. We have locals cranking out watermelon atrocities (hooorker), cannoli flavored sluice that tastes more like a fizzy glass of clove cigarettes (shablechhhhh), and even a few ales and lagers that smell like someone left raw chicken in the break room refrigerator too long (yeeeeeeeerk).

Believe it or not, it’s actually worse than I’m making it sound. I’ve personally seen brewers who seemed like they couldn’t quite figure out how to properly sterilize their tap lines and glassware, if they even knew that they should. I’ve seen revered locals that were so baffled by the technical aspects of temperature that they were sideswiped when their warehouse got hot in the summer. It’s amazing how terrible (most of) the local beer is here, sure, but it’s even more amazing that they navigated enough of the legal system to become licensed and viable. How did they do it?! They must have made some sort of deal with some sort of powerful entity.

Meanwhile in the southern half of the state, one of the few brewers actually making drinkable beer for us is receiving threats from a handful of confused nitwits for using Gandhi’s image on one of their most rabidly consumed beers, the Gandhi-Bot. Ignore that the eponymous, non-alcoholic Gandhi was a peaceful man. Ignore that Gandhi-Bot barely makes its way out of New Haven County, much less all the way to India, where a lawsuit has even been filed against them. Worst of all, they eventually caved to the pressure and sacrificed their own artistic license on the altar of the perpetually offended. 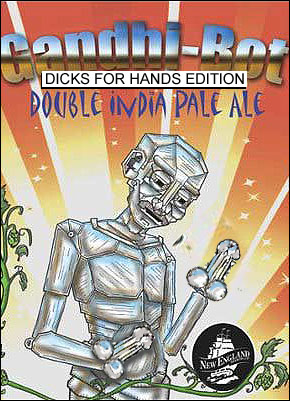 Can someone at NEBCO make this happen? Please?

What’s causing the sudden surge of unrest in the world? Why are people so angry and why are we still charging them with the task of brewing us barely-carbonated hate in $9 growlers? Why are we caving to jingoistic terror? What the Hell is going on?!?

It’s not just the destruction of something good, the poisonings or the threats of violence, either; the craft beer movement finds itself in devilish company, with the booming resurgence of shitty frozen yogurt clones and waves of sourced whisky. Truly, these are accursed times. How much more evil can things get?

As was foretold, written in dairy and grain, the Devil has returned to destroy us all. But seriously, what better time for Arran to finish its demonic trilogy, The Devil’s Punchbowl, than now, during the vile age of toxic beer, mystery whisky and infernal yogurt shops? A wiser man would have seen this coming. Today, we’ll speak about the first chapter, released sometime around 2012.

Nose: Classically Arran, with sweet hay and a malty body. It’s a bit green, like a dried alfalfa and apples. Tropical undertones of mango and whiffs of an empty Count Chocula box. Fried masa, fresh ginger, and mild iodine round out the nose.

Palate: Exceptionally well blended. Apricots and apples, along with Arran’s traditional peppery finish. Mellow peat. Salty with blanched seaweed and oyster shells. It has a gritty sugary quality, kind of like sucking the finish off of a handful of honey roasted peanuts.

This is a solid punch to the whisky drinking part of your face. I’ll take it!

It is a limited edition, but I’ve seen a few in the wild recently so they are still out there. The packaging is appropriately badass, too, unfolding like some ancient tome to the list of all the casks vatted for this single malt. Quality and packaging symbiotically justify the hefty price tag for me; around $120 or so.