This is just one of the many chapters in the discontinued-hero saga written by Bruichladdich in the early 21st century.You may find a few stragglers somewhere, but soon they will be no more, so if you want to find out what really happened to the Laddie Gorgon in chapter 21 then you’d better get to finding a bottle quickly. Don’t fret too much if you can’t find any, though. There are many other very interesting and delicious releases left in the distiller’s portfolio.

This single malt is a dark and heavy spirit with Oloroso sherry casks mostly dominating its lighter side. There are clashing moments when it becomes lively with fruit and others when it will turn you to stone for looking at it. It’s like a beautiful lady you fancy… who farts frequently and unapologetically; a heaping dose of whisky reality.

Nose: Sherry, sulfur candles, shrimp skins and flame-licked steak. Graham cracker and farmy cider doughnuts. Dusty like the plume from a car driving too fast down a dirt road. A few minutes after the dust settles, the esters pick up and you get a blast of figs, heather, and Midori. Fireball candies and star magnolia ride over sweet malt before getting in a fight with a few lost citronella candles and a very ripe pineapple. Eventually the fruit dies down again, leaving rubbery detritus, giant scorpions and leather polish in its wake.

Palate: The sulfur and figs are first, followed by latigo leather, tobacco and black pepper. Cumin, coal smoke and cinnamon with bouts of nutmeg, clove and allspice. Hints of York Peppermint Pattie and bug-spray make cameos. A roadside fruit vendor banished to the center of a winding, stone-dungeon corridor. After the fruit vendor is slain, the finish will light a meaty ember that grows into a full chest’s worth of dimly-lit, cherry-scented, paneled drawing room.

If you’re looking for light, easy malt, move along kid. This one’s for big boys and girls. Serve this with a nice hunk of seared red meat. 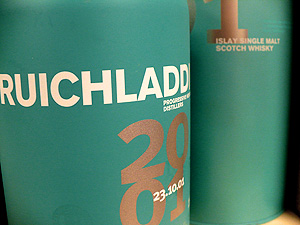 I hate to say the word “favorite” when talking of whisky. It’s hard to compare certain qualities and I feel like crowning one single distillery (or whisky) as king could never represent how I really feel about it. Still, it’s easy for me to occasionally let the phrase “The Resurrection Dram was my favorite single malt” slip out from time to time, even if I’ve had many other majestic drams since.

This bottling was released in a numbered run of 24,000 worldwide which makes me sad. Having bought three bottles I’ve consumed about 1/8,000th of the world’s supply by myself. Some people hear that and tell me that I have a problem. Goddamn right I have a problem. I can’t find any more of it at the local packy; That’s a huge problem!!!

As is an all too familiar story in the world of single malt distilleries, Bruichladdich shut down  in 1994. It was bought by a new owner in 2000 and reopened with it’s maturation houses still full of maturing spirit. The new owners distilled their first batch of their own new make in 2001, thus the title, an homage to the new life that was breathed into their stills.

This one is aged for 8 years in ex-Bourbon casks, of “an experimentally peated” spirit. Past incarnations of Bruichladdich were peated to around 3-5 ppm where the Resurrection Dram is peated to 10 ppm. Future renditions are planned to be unpeated completely, leaving the peat to their two other labels, Octomore and Port Charlotte.

Nose: The most delicious parts of the beach waft by first, followed by coconut, sweet lychee and grass. Deliciously fruity and nutty with a splash of oak and dried herbs. Bruichladdich, even their peated stuff, is not usually all that smokey, so the peat is purely the sweet and funky, vegetal kind. This one makes me want to drive to the beach late at night. Air and time make it sweeter and bring unbuttered toast.

If you gathered up all the people who bought a bottle of this and moved them out to an island, that place would most likely be less populous than the town you live in. With the delicious whisky, the interesting back story, and the unique ppm, you’d be a fool not to buy any of these you see in the wild.