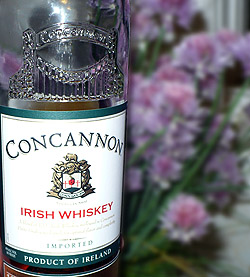 This spirit is the product of a cooperation between an Irishman-founded vineyard in California and the Irish distillery group Cooley. The Irish are famous for consolidating the production of many labels of whisky into a few distilleries. Counting museums, there are only around a half dozen distilleries left there and a considerably higher number of whisky releases. This Irish whisky is no exception. Though it is not an official Cooley Distillery brand, it does share the distillery floor with the likes of it’s other labels: Greenore, Kilbeggan, Tyrconnell and Connemara.

This twice distilled whisky is aged in a mix of ex-Bourbon casks and casks from the vineyard’s Petite Sirah releases, which are matured in a mix of “American and French oak”. Though their website is unclear as to whether they mean Pendunculate or Sessile when they say “French”, I definitely taste at least some Pendunculate influence and definitely a hefty amount of the American white oak from the ex-Bourbon casks.

Nose: Typically subdued Irish whisky with maple, rose, lemon, raisiny notes, with a light vanilla playing in the back. I could swear I smelled cannoli in there, too. Sweetly moderated woodiness coupled with a light malty aroma and some leathery bitterness. Some firm, 1970’s type notes not unlike Kodak film. Don’t expect a masterpeice, but at this price point I’m not complaining.

Palate: Smooth, malty, medium-bodied… $25. Even though Petite Sirah is a lavishly purple beverage, there is a good deal of white wine and vanilla in the finish. Oranges, too. There’s a little ugly firmness in there too, but nothing crazy.

As one of my friends put it, this is a great table whisky, that is, an affordable whisky which you always have on hand and don’t hesitate to share with guests who may not appreciate the good stuff. Would I buy another bottle? No. Do I hate it? Not really.