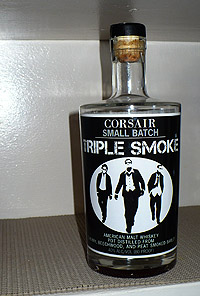 I’ll admit it… nobody’s perfect, and the Resevoir Dogs looking fellows on the bottle put me at ease (I loved that flick). The one-two punch of the word “smoke” coupled with the word “triple” made me think that the heist was going to be cool, that there would be amazing amounts of smoke piling up in the glass, and then things got ugly; That psycho, Mr.Blonde, showed up and cut some poor bastards ear off. In the end, nobody got out alive.

Reading about this distillery, any adventurous soul would agree that what they do here looks good on paper. Pumpkin spiced moonshine… barrel aged gin… hopped stout whisky?!? Like the great Marie Curie, who was slain by the power she studied but didn’t yet understand, this distillery (actually a set of two distilleries) may fall victim to the experiment. The old axiom,”trades of many, master of none” is repeating in my head. $50 for an American whisky that fails to blow my face off is… I dunno… maybe I’m spoiled.

Nose: Horrible first impression. This reaks of that gross, fake-cherry airfreshener that haunts my memories of the mid 80’s. It’s like a stale scratch and sniff sticker with some fish and cardamom. After leaving a half full bottle for a few weeks it subtley shifted to something a tiny bit less offensive, but I just can’t bring myself to speak highly of it.

Palate: Not a lot of smoke. There’s a weird bitterness that puts me off, too. It’s really hard to drink, mostly because of the fake cherry taste… it may be from an organic source like cherry bark, who knows, but either way it tastes awful. I hate to say cough syrup, but it’s a pretty accurate description. Medicinal with a type of fruity sweetness that doesn’t quite compliment it. Now this is a small batch release (I had batch #42) so it may be an off bottling.

Single barrel and small batch releases can be hazardous!