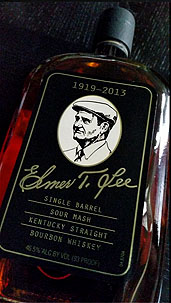 Elmer was the first to create a single barrel brand in the U.S., Blanton’s Single Barrel, when he named his new label after retired, former, distillery-president, Colonel Albert Blanton, in 1984. Blanton would allegedly bottle unique single casks for VIPs during his own stewardship of the distillery. According to the distillery, in homage, Blanton’s label selects from Warehouse H, Blanton’s favorite. The story goes that Elmer found his own favorite spots on certain floors in other warehouses and in his retirement chose casks for his own namesake label until his passing in 2013.

If you like the typical single barrel releases, you’ll love this one. Right after I opened it I immediately regretted not opening it sooner. If your mouth is starting to water, trust me, it’s as good as you think it’s going to be. Here’s a great example of a whisky that eschews a numbered age statement (straight is still an age statement of sorts) and manages to put out a stunning whisky at a great value.

Palate: Way more vanilla than the regular barrels. Bolder with dried apples. Cocoa early on and then on to thai chillies on the tongue, blasting past baked pretzel skin that creeps in through the back of the nose. The chocolate is now dark chocolate and smothering the cherries. The buttery flavor serves as a nice unifying backdrop.

The extra 3 proof really shines here. If I could find it, Id’ pay up to $65 for it, very willingly! 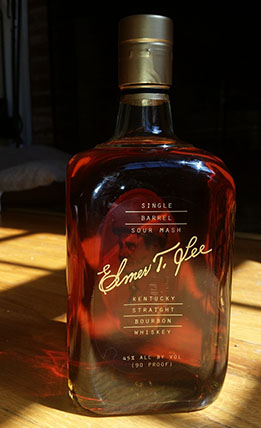 Today, we’re going to discuss one of my favorite Bourbons, the Elmer T. Lee single barrel. This is a great whisky plucked from the Buffalo Trace warehouses. The label alleges single barrel status, though from the several bottles I’ve tasted they all seem pretty similar with only minor differences.

I also have a surprise for you; a famous guest blogger! Hailing from the great state of Illinois, the land of Lincoln and the land of drinkin’, I’m excited to introduce one of my favorite whisky bloggers, Buck Chowdery, the Bondage Chicken.

HTDW: Greetings, Buck! Thank you for joining me. How was the flight in?

HTDW: Sounds exhausting. Well, I’m glad you made it. So can you tell us a little about yourself before we dig in and talk about this whisky?

HTDW: Wow! I didn’t realize you were a Kentucky Colonel. That’s quite an ironic honor for a chicken.

HTDW: So, how long have you been reviewing whisky?

HTDW: I’m sorry, did I say something to offend you? I don’t really care how you spell it.

HTDW: Can you answer the question or should we move on?

HTDW: Okay, let’s just dig right in, then. Shall we? What do you get on the nose?

HTDW: Yes. In your case, the beak. What do you get on the beak?

HTDW: I agree! It’s really nice. There’s some farmy notes, like the feed you get from those petting zoo dispensers. Muted orange peels, along with some Fig Newtons and a deep, cheesy, butteriness like a well-browned, cheddar grilled-cheese sandwich. It has a sweet and fruity side to it, too. Light brown sugar. Banana Runts© wrapped in old paper. Oddly enough, I can smell church pew, or maybe it’s faint traces of the old lady perfume left on them… yea, definitely both. 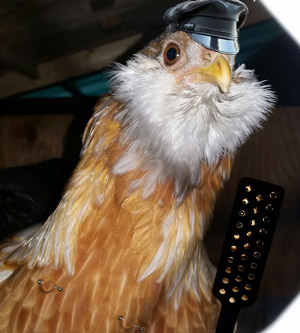 HTDW: Absolutely. The sweetness does take a second to come out and there are some profoundly delicate leather notes.

HTDW: Yes, Buck. We know that there’s no flavoring in this. My readers should be astutely aware of the fact that any non-straight whisky can contain adjuncts like “harmless” flavoring. I covered this back in 2013 when I discussed hops in whisky.

HTDW: Okay, so you’re kind of right. I didn’t spell it out that way, but we did discuss the 2.5% blending materials rule. Considering how at one time rectifiers did add flavor to a product called whisky, it shouldn’t have been a huge surprise that, because there were precedents for that, too, someday, someone would slip whisky flavor into their whisky. But let’s not argue. This is straight Kentucky Bourbon. Let’s move on to the, er, um… palate? Do chickens have palates?

HTDW: Good! I find it’s a little soft for me at first entry, but builds up that classic cooling pepper as it goes along. Not very sweet, but the finish rolls up to the tell-tale, spent vanilla bean that a lot of well-aged Bourbons can develop. It’s a very solid, classical, middle-of-the-road Bourbon.

HTDW: What? No, that wasn’t a chicken joke. Are you always this touchy? Can we talk about the palate?

HTDW: It is. Especially considering the rye in the mashbill. I find adding a little water boosts the sweetness nicely.

HTDW: Good point, Buck. At $30, the price is right on. It’s unfortunate that there are so many bottle flippers ripping this off the shelf to sell at 100% markups.

HTDW: Well, that’s where we’ll have to agree to disagree. I think it’s an unfortunate practice and makes good Bourbon less accessible, but let’s save that conversation for another day. Maybe next time we have you back, we can dig in to that topic a little more. You will come back and visit us again, soon, won’t you?

HTDW: Awesome. Thanks again for joining us, Buck. Cheers!

I’m quite taken with this everyday drinker. It’s sad to think that the eponymous Elmer Lee passed away last year. Hopefully Buffalo Trace can keep his legacy alive. This is a spectacular Bourbon for $30, which is about as much as you should have to pay for it.

*all characters appearing in this work are fictitional. Any resemblance to real persons, living or dead, is purely coincidental.