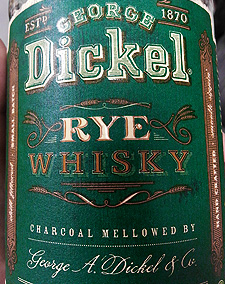 Though they spelled it correctly, they did just about every other awful thing to this whisky that they could, just short of assaulting it with a bar of soap in a sock. They outsourced it from Indiana. Chill-filtered and charcoal “mellowed” it before bottling. They also bottled it in… Norwalk, CT? What the hell? Even though this isn’t my favorite, I still like rye whiskies so much that it’s almost hard for me to seriously write about them. I feel like I’m repeating myself and it’s difficult for me to be critical, so here’s a crappy poem I wrote instead! (You might want to skip over it.)

This one rhymes with pickle,
which Diageo must tickle.
Have a gulp or trickle.
Flick a nickel buckled Dickel.

Hey, I told you it was going to be crappy. I’m no Ezra Pound, but maybe it would have seemed better if I had written half of it in Greek? Next time you’ll listen to me and skip it. Still, my poem would make more sense on the label of this rye than all that nonsense they put on there about George Dickel, who had less to do with this whisky than I did after I drank it.

Nose: All the usual suspects- black licorice, pickling spice, vanilla and caraway. A significant amount of hot vinyl, too. Hazelnut, lemon, cinnamon and marjoram peppered with some gunpowder make an appearance. A tad soapy from the sock-beating.

Palate: Slightly smokey with that gunpowder taste and some soap in the finish. Peppery and very traditional for a rye. The vinyl follows suit into the palate and keeps the spirit on its toes.

$25? Can you really complain? If you’re looking for a rye to mix, this is it. It’s bold enough to pull the spice flavor with it but not bitter like a lot of cheap-o ryes can be.