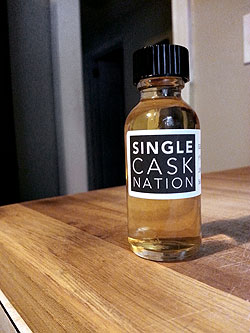 This single malt spent all twelve years in a first-fill ex-Bourbon cask, one which only 148 bottles escaped from, so hurry up! For scale, if you bought one bottle for everyone that works at your local supermarket there very likely wouldn’t be any left.

Glen Moray is considered an economy brand in the official bottle, but it has lots of potential, as illustrated by frequent indie bottlings like this. It’s image as a low cost blending constituent may have had something to do with why it’s previous owner, Glenmorangie, sold it to another French blending house in 2008. I haven’t had any of their official bottlings yet, but judging by this single cask, it’s also possible that they were actually too similar to Glenmorangie and the effort it would have taken to flush out Glen Moray into a luxury brand wouldn’t have added a new dimension to their portfolio.

If you’d like to sample all the Single Cask Nation releases you’ll have a chance to on October 9th and 10th at the Whisky Jewbilee. They have Designated Driver tickets available for $35 now; a commendable offering, in case you don’t feel safe piloting yourself home. That modest cost feeds your driver, and for those of you who don’t want to go stag, it can make it much easier to entice some of your non-whisky friends to join you. If you use the code H2DW13 in the promo code box you can 10% off of your general admission ticket, too!

They will have a new, extremely-limited bottle available at the event, one which will likely sell out quickly: SCN’s first ever Bourbon bottling: a high rye, high proof Heaven Hill. Joshua Hatton was kind enough to share a tiny sip with me at a tasting, and let’s just say I’ll be at the door early and may or mat not be wielding nunchucks to clear the way between me and the list. Check out the crazy awesome label! 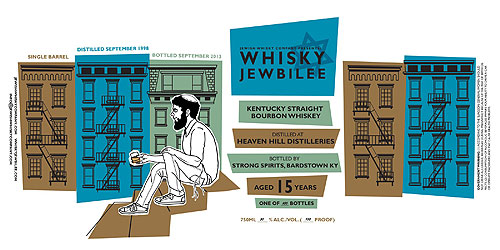 There were only 146 bottles of this awesome Glen Moray, to start. There aren’t even 100 of the Heaven Hill, but getting back to the Glen Moray…

Nose: Lush red grape skins baking in the sun are the first thing that comes to mind. Next streams of honey liqueur and dried apricots. It’s incredibly fruity with light strawberry air-freshener, that yellow melon I always forget the name of and juicy, papaya-drenched malt over a little bit of toffee. Eventually it transitions to sweet cedar.

Palate: Hot, as expected, but not as drying upfront. Mixed berries speed by too quickly to identify. Shark Bites fruit snacks wrapped in fresh grape leaves with a sprinkle of cayenne. A tint bit of pear with a bright, refreshing Honeydew (A-ha!) finish that sticks around.

Another very special offering from the Single Cask Nation. Thank you, Jason Johnstone-Yellin, for the sample!