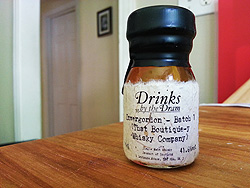 The elusive single grain Scotch! In Scotland there are single malts, blended malts and just plain ole blended whiskies, all of them abundant on any shelf, but the fourth category, single grain whisky, doesn’t have many contenders yet. A fifth category, blended grain, has even less.

This is a curious category in the whisky world. If they’re operating a column still, the distiller can use any mash bill at all, so long as there’s a little bit of malted barley in there, too. If they use a pot still then they can’t use pure malted barley, either. Because of this, single grain scotch can use Bourbon, wheated Bourbon, and Rye style mash bills, and can emulate the Irish or Canadian styles as well. This is, perhaps, the most flexible of all the Scotch whisky styles but doesn’t have a marketable enough designation to merit extreme popularity.

There’s probably a lot of rye in the Invergordon Batch 1 mash bill. That or maybe it sat in an ex-rye or a heavy rye ex-Bourbon cask along the way. Whatever the case may be, there’s definitely some spicy American influence. The folks at Master of Malt were tight lipped about the details, but any American whisky lover will find a lot to be familiar with in this single grain Scotch. Canadian whisky fans may find a few notes they’re familiar with, too.

Nose: I thought this was a Bourbon or Rye at first. Citrus marinated green olives and rye spice. Smoke and spiced chocolate. Mildly coppery with lots of grassy notes. Squid funk and vanilla frosting. A little earthy with perfumed dryer sheets from a few houses down the road. Subdued almonds and a touch of rounded bitterness.

Palate: Pumpernickel and tons of caraway with bitter pleather and guava. Slight copper with tangy apples. Coconut husks and cherry bark with a touch of rum and chocolate. Pleasant smoldering match-head sulfur and Bourbon vanilla beans in the vapors.

You don’t see a lot of rye flavor coming out of Scotland. This is a boundary pushing whisky for the British Isles.

Thanks, Master of Malt, for the neat samples! Be sure to check them out if you’d like to give this single grain Scotch a try.