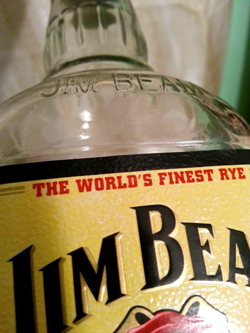 The label says this is “the world’s finest rye”. I’m not making this up. World’s. Finest. Thank god this economic downturn is finally over: the finest things in life are back to only costing $18, again. National crisis averted. I’m suddenly rich as hell and can stop spending all this money trying different rye whiskies, because here it is: the world’s finest rye. Adventure over.

Actually, this is the stuff fiscally-prude, wealthy people drink because they have no time to find out what good whisky actually tastes like. Oh, some food blogger who doesn’t try very many whiskies said it was really good? Well, that guy clearly has no idea what he’s talking about because this isn’t really good; it’s the finest goddamn rye in the entire world. It says so right there on the label.

In a brilliant marketing move, Jim Beam keeps their most terrible spirits in the bottle with their company’s actual name on it. I always wondered why distilleries did this. When I see Jim Beam in the print on any of their premium “small batch” brands I don’t think “hey, this must be their premium stuff”. Instead, I have flashbacks to my last brush with toxic shock syndrome after the most recent dose of Jim Beam I endured took its toll. I would think they would want to put their good stuff in the Beam bottles and silently release their most poisonous casks under another label, something like J Taylor M’Liversucks.

But I digress, things aren’t nearly as bad as I’m making them sound. The nose wasn’t poisonous. It was just really boring. “Is this really rye,” I found myself asking, “or is it decent Bourbon watered down with something from a mop bucket?” Nosing it next to almost any other rye at all makes it seem even worse, but tasting it was really where I decided to give this the lowest rating I could. Is it mixable? Well, it won’t ruin a drink but it’s not going to help it out any, either. If a recipe calls for rye, it’s asking you for something with flavor and this is not it. Is it affordable? Yes, but is that what whisky is really about? Because, silly me, I thought it was supposed to be about flavor.

Nose: Sliced whole wheat bread. No, not the good stuff, the stuff that people cut holes out of and smoosh their cat’s faces through to be funny. Faint pine sap brightness. A wet dish sponge with a drop of Dawn. A tiny bit of corn sweetness, but compared to almost any other rye this is extremely underwhelming.

Palate: It has a bitter base note. Fish food, orange zest, crushed multi-vitamins and pennies. The finish can’t go away fast enough. I would call it cheerless, like it’s mourning a lost family member.

Jim Beam’s callin’ you a chump, sucka! If you want my advice, for an extra $3 you can get yourself a bottle of delicious Rittenhouse 100 and leave all this unpleasantness behind you.