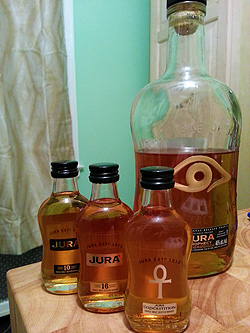 In 1946 a man named Eric Arthur Blair moved to the Isle of Jura to recover from a bout of then un-diagnosed tuberculosis. He had recently found a publisher for a bizarre fairy tale about warring clans of pigs with dogs which the poet T.S. Eliot refused to publish.

Eliot refused not on the basis that it was a terrible book, but rather the fiction made a convincing case that public-minded pigs would have disproved the allegory. One day it would overcome this temporary set-back and become a prominent enough novel that it would force high school English classes everywhere to have serious discussions about a pig named Snowball.

Once on Jura, Eric began penning what would be his final novel, a dystopian prediction of the world to come, published in 1949. The book was titled 1984, and hopefully by now you know that I’m talking about the man with the pen-name George Orwell.

Much like Orwell’s career, the distillery on the Isle of Jura has some painfully childish duds and some deliciously evil releases in its portfolio. The common thread between all of these releases are dank oceanic notes and a heady tobacco presence which ranges from great to wretched, depending on the bottle. The 10 and 16 are unpeated, unlike the NAS bottlings.

Palate: Musty hay. The ginger flattens out. There’s a meaty, funky flavor, kind of like the bloom on a good sopressata. The tobacco is drying and a little numbing. The palate is nicer than the nose and after you drink a little bit it helps the nose become richer.

If you really like this one but want to move up a step, I would recommend trying one of the Auchentoshan Valinch releases. They have the same meaty, gingery note, but layered over a much more interesting palate and at a much more attractive proof. The Jura 10 yo nose is a little flat for me.

Nose: Much richer and a little sharper than the 10 yr. Perfumed stone takes over where the ocean from the 10 retreats. Sweet malt. A touch of Sambal Olek chili paste spice up some dried apricots and apples. For a few moments here and there you’ll find chick pea and falafel batter. The tobacco is more like a pack of cigarettes that once had a clip in it.

Palate: A little spicy with the same tobacco but it’s a tad sweeter and hotter than the 10. Not as drying. A little apple and leather in the finish. The nose is nicer than the palate. There’s a little wet dog running around here at times, but when she’s playing outside this can be a tasty dram for sure.

The nose is much nicer on the 16 year than the 10, that’s pretty obvious, but once you start drinking them I find it difficult to pick one that tastes better. One is rich spice (16 year) and one is meaty ginger (10 year).

Nose: Stale ash tray tobacco and rotten peat. Yeasty with sour, Belgian-style beer. It’s a little bit like a dead seagull. It gets sweeter, like Fritos, once you smell it for a while, but it never gets too far away from that dead gull. Lemon tryst and the original Bod Man body spray smeared over the inside of a musty, bombed-out church at the end of a long, hot summer. More death.

Palate: Bitter at first and funky as it goes down, like I just swallowed a handful of dirty change or someone just snuffed a cigarette in my chest. This tastes a little bit like how an old lady smells without any perfume and lots of dirty pug-face in the finish.

Palate: Tangy copper with a smokey finish. Numbing. Dried leaves and some phenolic notes not entirely unlike Listerine. The fresh fish from the nose is barbecued now. Polished wood, like you’re drinking a delicious church pew. A tad rubbery. A tad savory. The finish sticks around for a while.

The NAS peated Jura line moves a little farther from the ocean and into the peat bogs, but the brine is still wafting inland a little bit.

Most of Jura’s whisky is delicious… but you should definitely do yourself a favor and toss that Superstition right down the memoryhole. The 10 and 16 yo bottles also seem to be a higher proof in the US then what’s currently available at the distillery (both are 40% abv there).