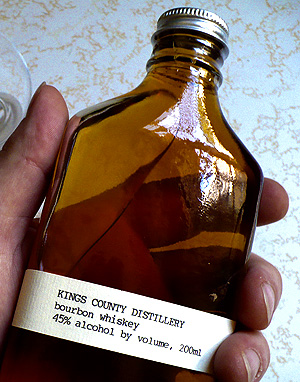 Well, I figured for the first official review I’d do something special. So here’s New York City’s own King’s County Distillery Bourbon. Opening about a year ago, they claim to be New York City’s oldest whiskey distillery… which is funny because it’s not only the only whisky distillery in the city, but it’s only been open for a year.

At the moment, it’s still impossible to find this Brooklyn artisan’s wares outside of the city, leaving the curious to mail order a sample from a New York based vendor, like Astor Wines or Park Avenue Liquor, but adding the cost of shipping to the already exorbitant cost of the bottle could be the prohibitive nail in the coffin for the average whiskyphile. At the moment it retails solely in 200 mL flasks for about $25, making this a little under $100 for a full sized bottle’s worth. Is it worth it?

Well, I was immediately put off about the size and price, true. I picked up a bottle while I was randomly walking around New York. My wife and I took a bus into the city (never doing that again) and I was pretty sure a spot of something for the ride home would come in handy. I didn’t want to carry a whole 750 mL bottle off of the bus when we got back to Hartford so it was perfect. After carrying it around in my jacket’s inside pocket for a few minutes its diminutive bottle began to grow on me. It feels really nice in the hand, too, though the quality of the whisky and the day-drinking hobo-friendly hand-feel stands in stark contrast to the price.

Nose: Tons of fresh cut grass and a little fried calamari, followed by heaps of fresh oak, fennel and caramel. Frosted sugar cookies, orange hard candies and a touch of cinnamon kick in after a few minutes with the glass, but you really have to dig for it through the wood. Saying some of those things is misleading because that makes it sound delicious, and this whisky is terrible. There are a lot of jagged edges and the flavors are all very shallow and extremely young.

Palate: Wood dominates. It’s not as cooling as the typical Bourbon though, just woody. The more delicate of the flavors that shine through are turpentine and raw alcohol. It’s got a little sweet and sour cereal flavor that develops in the finish, but the flavor isn’t very complex and it’s obviously only three months old.

The distillery uses miniature casks to age their whisky, not because it tastes better, but because they have to carry them, manually, up a flight of stairs to their aging room. The greater ratio of liquid to wood in a smaller cask darken a whisky more quickly. That flavoring is, however, different than old-school maturation in a full-sized cask. Some whisky chemistry cannot be rushed.  For smaller casks, this one is standard… it sucks.