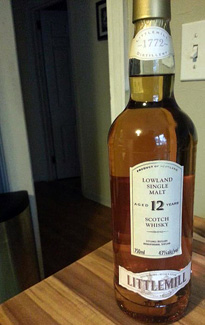 The dismantled Littlemill distillery closed its doors for the last time in 1992, but unlike Rosebank, you don’t hear as much about this lost Lowland Single Malt. The price echoes this sentiment. The real mystery here is how, like Rosebank’s Flora and Fauna release, this is only a 12 year. Is there a warehouse full of bottled whisky somewhere? If so, how much is left?

Littlemill’s stills were a little unusual at the end of their time. They began experimenting with new still shapes and metals, in a desperate attempt to try and remain relevant… it didn’t work. One of their most famous experiments, instead of a swan neck angled off the top, they used a rectifying unit which cools off some of the spirit and returns some extra impurities to the pot the way a collumn still does, a still named the Lomond Still. If this is indeed the still that produced this 12 year, does the unusual still make this not a true single malt? They preformed the second distillation in a true pot still which, I imagine, is how the whisky retained the single malt designation. More controversy, the malt and water both came from the Southern Highlands, not the Lowlands, making some folks question the authenticity of their Lowlander heritage. However, Lowland is a purely geographical distinction, and this distillery was almost 30 miles below the line making it true.

The Lowland style is partially rooted in the general shape of stills historically used in the area versus the ones used in the Highlands. At one point, the Scottish government forbade the export of Highland spirits giving the Lowlands an edge on export to England. Many in the Lowlands developed squatter, faster stills in response, to help create whisky quickly enough to meet demand. Even though the squat shape was a short-lived tradition, the unusual stills last used at Littlemill were, in my mind, a throwback to the historical differences in equipment.

Nose: At first whiff I catch a little bit of coffee and oregano then hay. A large snifter makes it much sweeter and reveals more vanilla and malt.  A little cedar-y. Stern coconut, sweet onions and brand new white wall tires. Crab meat. Rainy grassy fields. A wee bit of maple, corned beef and cinnamon lurk beneath the grainy nature of this one.

Palate: If you had any hope for a sweet entry, the first sip smashes that. Very grain forward, almost a little bit like a Canadian whisky and then the coffee catches up in the finish. The coffee does a little dance with some rye-type spice, making me do a double take. Puffed rice in vegetable oil and some lemon on the vapors. Chai? Is that chai? Quick someone figure out if that’s Chai… too late we’re back to the coffee notes.

I like this one, but if you’re looking for an accessible whisky then the Lowland style may not be for you, though there aren’t a whole lot of Lowland whiskies left to define the style, really. Considering the status of the distillery and dwindling stocks, the price on this one is very fair. If for that reason alone I would definitely say to try this malt before it’s gone forever.