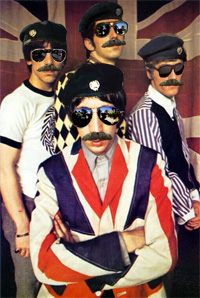 Last week I started a new band: Saddam and the Whosseins. We dress like Ba’athist dictators and perform a cappella covers of Who songs. We are the most awesome thing to ever come out of Iraq… other than written language, standardized units of measurement and accounting practices. Much like the Nikka Taketsuru line of Pure Malts, I’m not entirely sure that the world is ready for us yet.

This series is named after one of the two godfathers of Japanese whisky, Masataka Taketsuru, the other pioneer being a Japanese wine merchant named Shinjiro Torii. The story goes that right after WWI, at Torri’s request, Taketsuru moved to Scotland to attend Glasgow University and study organic chemistry. Taketsuru then began working at a few distilleries to study the Scottish distillers’ methods. He took on a local wife before moving back to Japan, bringing single malt whisky culture with them. Upon return, he helped found what would eventually become Suntory with Torii-san (See what they did there?) before branching off to start his own empire, which would later become Nikka, so he could explore what he thought to be superior locations for a distillery which Torri-san did not wish to test. 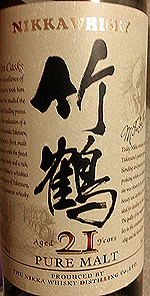 This 21 year is much more flavorful and sharper than the 12 year release, but both are at times amorphous and difficult to pin down. This one is slightly less capricious with age, though, and a snifter will help you really open up the nose, so skip the Glencairn glass.

Nose: Tomatillos! Smashed open pumpkin! Crispy bean sprouts and Vietnamese basil! Pear and orange toffee. The farmy notes have changed to crisp pieces of printer paper with peppermint lifesavers at times. Sweet malty-custard base with a shard of rustic bread. The orange builds and builds before dropping off into nowhere, leaving you with a glass full of Coca-Cola and wet leaves.

Palate: Malt and pumpkin at first, quickly resigning to a clean-burning charcoal fire. Dry like over-brewed Lipton tea with hints of mango. There’s a bit of the capsaicin from the 12 here, too. Both are cayenne hot and have a slow burning fire that swells up over you in the finish, though this one is a little mellower. A little beer, chocolate and ginger powder in the echoes of the finish, as well.

I woke up in a Mesopotamian doorway / The Kurdish guy knew my name / He said, ” You should not drink because Allah forbids it / if you can get up and walk that way” / Baghdad doesn’t have an underground / The breeze blew back my hair / I remembered throwing punches around / And preachin’ from my chair / Now come on tell me who are yooooouuuu? Ah-weee. / Who-who! Who-who!

Much gratitude to Joshua Hatton over at JewMalt Whisky Reviews for the sample!

The Nikka Taketsuru 12 year seems to be a polarizing whisky in the blogosphere, and whether people love it or hate it nobody seems to be talking about the obvious pepper to it. I’d swear they put some cayenne in here for a little kick. Am I going crazy? There’s a distinct possibility that I might be.

The first three times I sat down to take notes on it I wrote three very different reviews, with only a few common threads. I feel like I agree with both sides of the argument, that it’s good and mediocre at times. I began to wonder if my nose wasn’t having trouble on most of the days I didn’t like it, but in reality, each sitting I wrote for went from opposite extremes and back again trying to describe it. This whisky is like a peppery Vesuvan Doppelganger:

Nose: Starts off a little farmy with a touch of squid before turning into lime and blueberry ceviche. Then again, sometimes it starts off with sweet pear and tons of malt before morphing into dehydrated apple chips. It almost smells mildly peaty, the way Johnnie Walker Black does. After a few rounds it moves into smoky/earthy territory with some paprika and cayenne pepper. It is all of these things but never all at once.

Palate: Not as sweet as I expected it to be. At first, it’s very subdued with flat malt. You can pick out hints of lime, but by the time you’re there it slips into smoked Thai chili peppers and gritty Mexican chocolate. The capsaicin builds. If you stop drinking for a bit, the finish kind of tastes like you ate a whole roll of Lifesavers candies a few minutes ago and the citric acid is still lingering. The finish is all cayenne, paprika and chocolate.

A strange whisky indeed. This is a blended malt; a blend of single malts from Nikka’s two distilleries, Yoichi and Miyagikyo. Perhaps the disparate releases that make this one up are fighting for control. Alcohol isn’t a homogeneous substance and I definitely find two distinct, dueling spirits locked up inside this bottle.