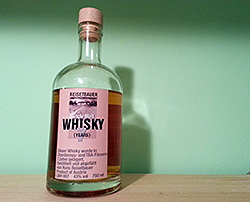 I picked this one up in New York City specifically because I had never heard of an Austrian whisky. Turns out, Austria’s long history of commercial distilling extends all the way back to 1995. Sigh. That was a good year. Calvin and Hobbes strips were still being penned. Biggie, Tupac and Timothy Leary were all still alive. People knew what MS-DOS was and Microsoft operating systems were still in the golden age of backwards compatibility. Mississippi had just ratified the 13th Amendment (the one that banned slavery… yea, not joking). When a beautiful woman walked by you could say “schwingggg” and people would laugh. The term “butt munch” was still in the public lexicon. The Downward Spiral. The Adventures of Pete and Pete. Free Willy 2… okay, so they weren’t all good times. But really, that Austria hasn’t even been commercially distilling for twenty years is something to think about.

Originally a fruit brandy distiller who distilled produce from his orchards, Hans Reisetbauer has been in Austria’s commercial distilling scene since the beginning. Hans would later team up with Heinz Velich of the The Velich wine estate and the late Alois Kracher Jr. of the highly acclaimed Weinlaubenhof Kracher vineyard and California’s award winning Mr.K label, to acquire casks. The whisky matures in the vineyards’ Trockenbeerenauslese and Chardonnay casks. Trockenbeerenauslese, like Sauternes, is a sweet wine made from shriveled grapes that have been infected with the noble rot, botrytis. It’s also a super fun word to say to people who don’t speak German or know a lot about wine. Trockenbeerenauslese? Ja! Danke.

Nose: Dry German chocolate turns to Nutella after the initial funk airs out. Musky like an old lady’s basement. Light and perfumed applewood smoke. Hops. Very vegetal. Old butter smeared over a mossy rock. The blade on a rusty chainsaw. If you took all the sweet out of a Sauternes wine there’s some of that botrytis left in there. Smelly tennis shoes. The malt is very difficult to pull out of it for me but it is in there, too.

Palate: Apple with lots of feints. Broccoli!!! Sharp, sour and dry. Cereal and cocoa powder, it actually gets more chocolaty the more you drink. Cheddar, if you really look for it… or maybe that’s the broccoli loudly wishing it had a friend.  Astringent. A little bit of the botrytis comes through. A hoppy finish with clove cigarettes that takes me back to a time when I owned a black duster and listened exclusively to music that terrified my grandmother.

Well, they said they were trying to make something different. I guess my rating on this one suffers from it’s complete uniqueness. I wouldn’t advocate trying this one to the beginner, but if you’re an adventurous soul with curiosity and almost $100 to burn… save your money.