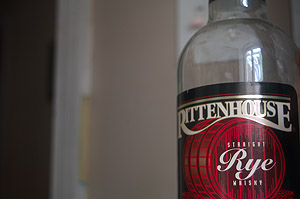 It’s sad that Bourbon has stolen the spotlight as the “American” whisky style, especially since rye whisky was not only here first, but is, in my opinion, infinitely more delicious.

Rittenhouse Rye is advertised as being crafted in the style of rye that early Pennsylvanian settlers use to make around the Monongahela River valley, way before the “corn patch and cabin rights” made bourbon so plentiful. This is not really Monongahela Rye though, it’s made in Kentucky. The distiller is also kind of mysterious about what makes it such, so take that advertisement with a huge grain of salt.

“Mon rye” earned it’s name back in the day, partly because it took so long to ship from Western Pennsylvania, so by the time it reached a busy enough port it had spent more time in the barrel and was thus a tad bit darker than the usual stuff. Besides the heavier cask influence, was it really better than other rye whiskies of the day? I don’t know. I’m not a 200 year old Pennsylvanian so I can’t speak to that… but it was probably famous for a reason.

Nose: Corn sweetness, like masa harina with a little bit of the stone it was ground on. It’s not the spiciest rye, or maybe it’s that the spice is atypical; most rye is thick with pickling spice and caraway but this one has more of a vanilla presence with clove and cola… and ketchup. A little sour, a little fruitier and a lot lighter than a typical rye. It has a lot to say for such a small price tag.

Palate: Sweet, sour and peppery. Spicier on the palate for sure. A little oak barrel char and then all the missing pickling spice and caraway reminds you that it really is in there hiding somewhere between the grapes and candied orange peel. I’m enamored with this one, partly because it’s so cheap that I don’t feel bad grabbing a second or third glass.

Is this my favorite rye whisky? Probably not, but damn good just the same and at a price point that doesn’t make me cringe to think of someone mixing it into a cocktail. And what’s better than a very drinkable rye for around $20? How about a remarkably drinkable rye made by folks who spell whisky correctly! True, it’s a small detail and they do a lot of things right here other than spelling the name of their product. Just sayin’…