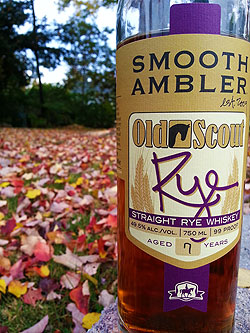 My birthday is coming up. The other day my wife told me she knows what she wants to get me but is scared she’s going to get some “detail” wrong when she goes to buy it. She hinted that I know a lot more about what she wants to buy me than she does and that I’ve already done lots of research while looking for one myself… so I’m pretty sure she’s planning on getting me a therapist.

Speaking of uncontrollably crying and awkwardly voicing your feelings to a stranger, there’s no therapist quite like a bottle of rye. If this bottle were actually therapy, though, it wouldn’t be the kind where you pay some asshole $200/hr to listen to you badmouth your mother. It would be the hard kind. The kind where you suck it up, mow the lawn, dig a ditch in the backyard and then start to feel better because of all the hard work you just did. It’s not a thinking man’s rye; it’s a working man’s rye; a grittier, slightly industrial selection from MGP Ingredients’ 95% rye stocks. 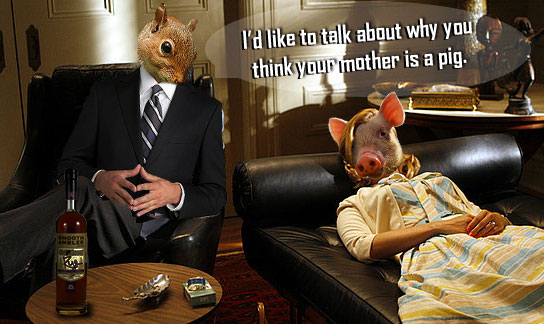 Nose: A tiny bit of ether, like butane or plastic dispensers filled with Orange PEZ. A crumb of gingerbread opens up after a few sips. Pecan pie. New tobacco sheds, burnt caramel, prunes, and corn fritters all in a department store. Elmer’s glue, sweet hay and crisp, yellow lined-paper. Malty considering it’s only 5% malt. The rye spice is a little muted, but present.

Palate: Dry pepper and kerosene-brined black olives. Orange PEZ mildly throughout. Dried apricots cured in a cedar humidor with a burnt caramel dessicant. Cooling swells up as it finishes, coating the tongue with a peppery tingle. Afterward, it settles into a tiny bit of LDI pickle juice before resigning itself to chewed-up mint toothpicks. It’s fun to imagine that this is what George Dickel Rye would taste like unfiltered.

West Virginia is home to at least three other distilleries that make whisky. Thinking about it, I can’t believe there are so few, smack dab in the middle of Appalachia. The history, especially, makes it seem like one of the most obvious places to build and operate an American distillery. I hope Smooth Ambler sets a good example for the rest of their fellow distillers, and can help foster a stronger, more viable whisky culture there.

Thank you, John Foster of The Artful Drinker, for the bottle! Cheers!!! 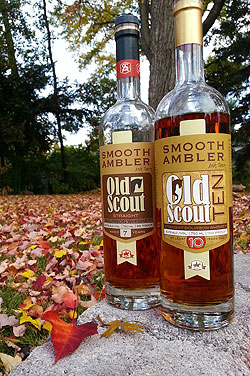 I haven’t tried Smooth Ambler’s vodka yet, but their cask-matured gin makes a very persuasive argument for itself.

As for the whisky, most of the stuff they make is wheated Bourbon, but to keep their options diverse they have at least seven other mash bills maturing throughout their two rickhouses. After a brief flirtation with small cask maturation, they chose to exclusively fill full-sized, 53-gallon casks, and so far, they’ve laid down about 900 of them.

The operation is still very young, though. Having opened in 2009, the oldest of their stocks is 4 years old. The current results are promising enough that talks have begun around a possible 5 or 6 year old bottling in another 18 months, but the two whiskies I’m writing about today are Bourbons with rye in the bill and both are older than the distillery itself. Distillation isn’t the only thing the team at Smooth Ambler dabble in. They also broker casks for a ryed whisky line under the label Old Scout.

They chose to add the Old Scout distinction to clarify that they were “scouting” for stocks they like, and that those bottles were not distilled in West Virginia. They pluck their ryed whisky stocks from the distillery in Lawrenceburg, Indiana, but they’re quick to point out that before it was MGP Ingredients’ and before it was LDI’s, it was Seagram’s distillery. Head distiller Larry Ebersold was in charge when the 7, 8 and 10 year old stock was laid down, and the attitudes of and about the company were much different then than they are today.

One last distinction, unlike many other “merchant bottlers” who say publicly that they’re only brokering casks until they have enough in-house stock to survive, Smooth Ambler intends to always have a series of whiskies they’ve picked alongside a series of whiskies they made. So long as they have the resources and market for it, why not? It’s a smart way to broaden your experience and keep your blending skills sharp while your smaller, craft distillery focuses on their grain to glass program.

Nose: Deliciously savory, like the exposed wooden beams in a fancy restaurant. Beefy with pan gravy and tangy ketchup. Ski lodge, hay, celery and torn spring greens. A mix of cashews and almonds with a little bit of caramel and sweet ether. Water opens up loads of vinyl and cumin.

This is a high rye Bourbon, a 60/36/4 blend of corn, rye and malt and it’s definitely spicier for the extra rye and three less years. Even though it wasn’t distilled there, this is a very “West Virginia” whisky: rugged and unapologetically bold.

Nose: Sweeter, smoother and not as woody than the 7. Model glue. The rye backs off a little and makes some room for more malty influence. Almond cookies and marjoram. Mild citrus, wood polish and marinated green olives. More reserved and not quite as farmy as the 7. Vanilla frosting, orange creamsicle peek in for moments between grass. A little bit stony like a hot rain puddle on the sidewalk.

Palate: There’s a bright, metallic lime note that appears from time to time. Maybe it’s just the rest of the present citrus notes shifting around in my brain.  Like the nose, this is sweeter than the 7, but not as woody and with less of the light solvent overtone. Mild green apple and Dr.Pepper following the late palate into the finish.

The 10 year is 75/21/4 corn, rye and malt, and it’s definitely sweeter for it. The extra age mellows it out, so this one seems a little bit deeper and more rounded.

The casks chosen for this and previous batches of both Old Scout 7 and 10 are non-chillfiltered vattings of 3 or 4 barrels, all the same mashbill and age. In a few weeks they plan on releasing some Single Barrel and Cask Strength versions. The cask strength stuff sounds particularly exciting.

For $40 and $50 each it’s really a matter of preference as to which you should choose if you see them both. Hotter and spicier chooses the 7, mellower and sweeter chooses the 10.

Thank you to John Foster of The Artful Drinker for the bottles! Cheers!