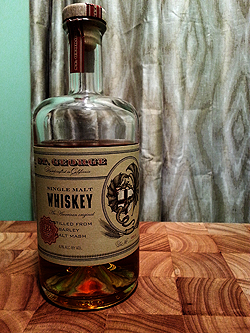 I wonder how often St. George’s head distiller, Lance Winters, considers his given name in context of the eponymous saint’s legend? He is, after all, the distillery’s weapon, the mighty Ascalon, with which it lances the dragon. It’s a very cool name, either way, to match what looks like a very cool place to work.

A very different style, finding the single malt in this glass may take a little time. Along with the distillers at Stranahan’s, Charbay, Anchor, Rogue, Corsair, Sons of Liberty and maybe a few others I forgot or haven’t tasted yet, Lance begins his whisky production as a brewer. I won’t bore you with too many details, you’ll hear every blogger under the sun explain it at least once, but the basic concept is that the better your ingredients are the better your recipe will be. It’s an increasingly common story among American distillers. The American irreverence for tradition leaves lots of room to make obvious improvements in the whisky paradigm, like distilling a more delicious beer than usual. But the peculiarities don’t stop there…

For the beer nerds out there, St. George uses a mix of two-row pale-ale malt, crystal-malt, chocolate malt, and black-patent malt in their pre-distillate beer. Some of the malt is smoked over a mix of alder and beech wood. After this unusual handling of the malt, the spirit was distilled in a small pot still and aged in a myriad of different casks. This 12th lot was chosen from a combination of fifteen different port, sherry, French sessile and used bourbon casks; which brings us to my next point, that each successive release is different; Lot 11 used more sherry casks, for instance.

St. George, originally a eau de vie manufacturer, also makes rum from California sugarcane, an American version of tequila, absinthe, gin and vodka along with a handful of other liquers and brandies. I’m always a little skeptical of the multi-spirit producers, but after tasting this one and reading a little about their hickory roasted agave experiment I have high hopes for the rest of their line. Along with Charbay, these guys are busy building up the whisky culture on the left coast… now if we could just get them to spell it correctly.

Nose: apples breathe off very quickly to make room for the tons of hops before making way for some pencil graphite, sandalwood and incense. I find a little cinnamon and spice in the finish. It takes turns being a sweet little thing, a dirty hippy and a dry sarcastic bitch, going back and forth the entire time it’s in the glass. It’s like dating three women at the same time. After all the women find out about each other, praline nuttiness ensues. It’s only 43% so I wouldn’t add too much water, but a drop unleashes more smoke and brings a Balblair-esque pineapple maltiness to the party.

Palate: hops are the first and last things I taste here. Sometimes you can catch a wisp of smoky apple. It’s a bright palate. Not nearly as chocolaty as I expected it to be. It has a delightfully savory asparagus type note that gives a rich backbone for the perfumey notes in the finish to play over. Unlike the nose, which eventually unlocks some hint of malt spirit, the palate is uniquely St. George all the way through. There is, unfortunately, a lot of alcohol in the finish.

If I were blind tasting this one, I would have mistaken it for a hopped whisky. Even after the distillery confirmed it wasn’t hopped, I still have to drag myself into believing it. Maybe the yeast is somehow producing a few alpha acids? Maybe it’s the two-row pale ale malt? I can’t say for sure but not for lack of asking.