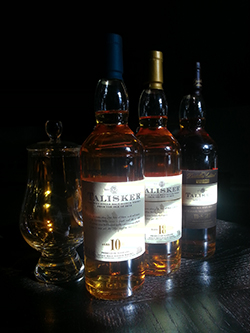 Talisker, a member of the colossal Diageo clan, is the only distillery on the Isle of Skye. Skye is also the island where Drambuie was allegedly developed, which is a crazy number of globally-recognized brands to generate, considering the population. For context, I grew up in a small suburban town called Windsor Locks that’s only 6 usable square miles. Nowadays, its biggest claim to fame is that there’s an airport there, so there are two Dunkin’ Donuts, seven liquor stores, thirteen hotels and nowhere to buy actual groceries. There are a third more people in those hellish 6 square miles than on the entire 639 miles of Skye. Not that I live there anymore, but a distillery would be nice.

Unlike Windsor Locks, there isn’t a whole lot of bad stuff you can say about Talisker. It’s briny, smoky, gingery, sweet, well-balanced and invariably delicious. It’s hard for me to think of things that are consistently as awesome as the Tali line-up, but here are a few off the top of my head:

Things that are as awesome as Talisker’s line-up:

Palate: Hot and a tiny bit drying. Tart peat with ginger snaps and tide-pool salt-water. Flinty like the inside of a cave. Medium-smoke finish with mere tinges of pear.

A solid entry level release. I’m not one for marketing gimmicks, but Diageo calls this one of the “classic malts” and I don’t disagree.

Nose: Much sweeter and slightly richer but still close to the ocean. Pear Jelly Bellies assists the ginger now. More charcoal in the smoke. Malt and cloves in an unfinished wooden bin. Orange blossom honey.

Palate: Butterscotch, ginger powder and lemon juice with a slightly more phenolic peat. Bolder with a blend of pink and white peppercorns. Slightly smokier with some more phenolic numbing and a pile of wet sticks for good measure.

Old enough to gamble and die for its country, but not old enough to drink itself in the US.

Nose: Even richer and creamier, like an 80’s ski lodge, but the sweetness is more tempered. Smoldering allspice and graham cracker ice cream with hot fudge. Lime and galangal.

Palate: Saltier with drying smoke and stone dust in the vapors. Cinnamon, figs and the galangal from the nose. Punchy on the tongue and physically numbing like the 18 but without so much phenolic influence.

It’s hard to say which I like more, the 18 or the Distiller’s Edition. Both are amazing in different ways. I guess it depends on the mood I’m in as to which one I would rather pour (and how much money I have considering the 18 year is much more expensive). If I want a sweeter ex-bourbon cask I would go with the 18 and if I were craving more of a rich sherry influence I would choose the darker ex-Amoroso cask Distiller’s Edition. Then again, if I weren’t feeling the sherry but wanted to save a few buck, the 10 is mighty nice, too. Cheers!