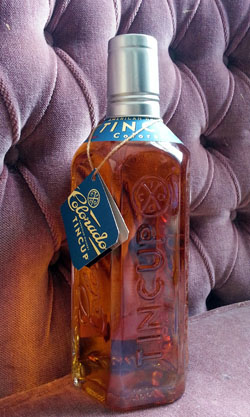 “At 22, Jess Graber packed up his bags and moved to Colorado in hopes of finding himself and inspiration. A volunteer fire fighter, Jess fell in love with the mountains and discovered his love for distillation. And Colorado’s TINCUP whiskey was born.”
-Tincup’s neck tag

Strange. Even ignoring the weird sentence fragment and the end, that blurb seems disjointed… like it’s missing something. Oh, that’s right. In between the firefighter thing and TINCUP, Graber established and then sold Stranahan’s to Proximo Spirits. He’s not completely free of Proximo, though. Now he’s lent his name to a sourced spirit under their stewardship. Red, White and Bourbon’s Josh Chinn nailed it when he postulated the exact mix of MGPI mashbills used. Less than two months later they would officially confirm what Chinn surmised on his own. Nice job, Josh!

I’m not sure Proximo intended to reveal their source, though. It seems like Josh might have blown their cover and forced them into damage control mode. Like many bloggers before me who tried to jump on the story when Tincup first became available, Proximo never returned any of my emails and the Stranahan’s people were mildly annoyed by my queries. There was a vacuum of information.

Their more recent and painfully cheesy website seems to imply that they were working hard on the Colorado angle up until the flurry of interviews where Jess Graber gave away the game. Look at this ranch. Elk good. Water cold. Jess Graber not single. We make whisky. No. I’m sorry, Jess, but you don’t. Not anymore.

I have to admit, I’m pretty annoyed by people who buy from MGPI at this point. Trying to find new, American whisky has become a chore. These guys in Indiana are flooding the market. Now, I have to spend twice as long scouring labels looking for the word Indiana, or even better, the phrase distilled by followed by anywhere else, and it’s getting harder to avoid buying into it. There have been points where the open part of my whisky shelf had been inadvertently taken over by MGPI products. Not that all their stiff is swill, some of it is very good, but I’ve walked into smaller stores where they didn’t even have anything else other than the regulars (Johnnie, Jack, & Jim) and MGPI wares. That’s crazy!

Many of the non-distiller producers have the same lame excuse, too: I wanted it to be affordable. Well, sourced-whisky vendors, I wanted it to be different. I didn’t want my whisky shelf to be an MGPI collection. As if they knew people would eventually come to the same disappointed conclusion, they expanded their line-up last year, to include more rye mashes, along with a new wheat and a barley mash… sigh.

I have to give the Tincup team credit, though. This is a really cool looking bottle. The hexagonal shape makes me want to carry it with me and watch the spirit slosh around. Where Stranahan’s left it’s cup to be held on by gravity alone, and was often lost immediately after opening, the tin cup on top of Tincup actually screws onto the bottle, integrating nicely.

Nose: Smells more like rye than a Bourbon. Sunflower, carpenter’s pencil, cinnamon candies and 80’s ski lodge. Guava and salvaged barn board. Lime, celery stalk and sweet, virgin, pool liner. As it airs out, the graphite swells. It’s a little sharp but not very complicated.

Palate: Cherry cough drops with a tiny smudge of black licorice. Like the nose, the start of the palate screams rye, but as it progresses it let’s some Bourbon out. Blindfolded, I would have had a very difficult time guessing whether this was rye or Bourbon. Graphite with some cinnamon spice. Not a huge complicated whisky with a simple finish to match.

I give this rating very timidly and with one caveat: for the $27 I’ve seen stores sell it for, awesome, but for the $35 I see on a few websites, I’d hesitate.