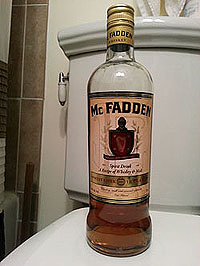 To celebrate International Whisky Day, today I’m going to talk about this… um… whisky…ish substance… ironically of course, because whisky needs no holiday, yet seems to have three, if you count the antagonistic World Whiskey Day.

This bottle was produced by West Cork Distillers, a small start-up from Ireland founded partially with grant money and support from the West Cork Enterprise Board. The Board was part of a group of 35 that the European Union helped to form to develop businesses and inspire entrepreneurship across the region. If you’re looking for proof that politics are terrible at developing pragmatic businesses, you may not have to look much further than this. From the outside looking through the lens of this product, it seems a little bit like a lab trying to grow businesses in test tubes using funds allocated by the EU Structural Funds Program.

West Cork Distillers isn’t the only thing here that sounds engineered, though. This five person operation, two of whom were previously deep sea fisherman, does not appear to be distilling spirits, so this bottle, which the Facebook page and neck band precariously dub “whisky,” fits the description bizarrely engineered, as well. 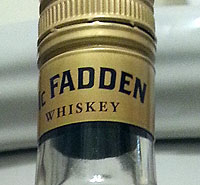 WCD’s flagship product, a 22% abv Irish spirit called Drombeg, was “created” to answer the needs of folks who don’t want to drink beer but can’t tolerate hard liquor or fruit-based alcohols. According to their webpage, it is “one of only two non-sweetened savoury brown spirit liqueurs on the global market.” Their Kennedy and Lough Hyne products appear to be equally strange permutations of brown, middleweight proof beverage. Thirsty yet? I know I am, but I’m not in the market for savory, brown liqueur, so what can these folks do for the likes of hard-drinking, neat-whisky loving me?

While there does appear to be some misdirection, make no mistake, the main label defines this as a “spirit drink” , “a recipe of whiskey and malt” and offers that it is “oak filtered,” whatever that means. It sounds like a Frankenstein of grain alcohol infused with malted barley, caramel color and sawdust, though the label also implicates at least some whisky in the liquid contents. What mysteries lie in wait for those daring enough to try this beast? Official sources declined to answer my emails so let’s find out the hard way.

Well, it was challenging… to keep down.

Palate: Hits of that flavor grape soda acid leaves in your mouth after a sip coupled with bitter prednisone. Unflavored gelatin. Unmalted barley. Especially boozy and fake. It has a thin, solventy mouthfeel and lots of chemical signature stalked by a mildly smoky finish.

This stuff is creepy. I took my first sip and woke up shoeless on a park bench 20 minutes later with a raging case of pinkeye and no recollection of how I got there. If you’re looking for a passive-aggressive Secret Santa gift for that whisky-drinking loudmouth you work with, this is it.

EDIT – 5/2/14: I was contacted by John O’Connell of West Cork Distillers, requesting I update this entry with more information about the product. I’ve added his comment on the McFadden below to clarify.

“Kennedy, Cavanagh & McFadden.  These three products are technically classified as 40% abv savoury brown spirits.  All the alcohol in these products comes from 3 year old whiskey with no added flavours or additives.  I guess that the key question that you would probably be asking is why are they not declared as whiskey.  The reason is that we apply two unique and innovative processing steps in the production after the 3 year old maturation.  After preparation of the whiskey which is in accordance with the legal requirements – prepared exclusively from grain, distilled to not more than 94.8% alcohol, matured in oak cake of no more than 700 litres for at least 3 years, we apply these two steps. The unfortunate reality is that even after three years maturation the whiskey is not ready for bottling based on qualitative analysis (this is the case with all EU whiskey).  We apply an additional artisan processing step to produce what we think is a good tasting product – Steeping in malt.  In times gone by when distillation equipment was rudimentary quite often there used to be boil over from the still, though the lye and into the condensation tubes.  This used to have a deleterious impact on the quality of the whiskey which was eliminated by steeping the whiskey or first spirit in spent grain.  The high solvent quality of the whiskey extracts out an ever so slight sweetness and mouth-feel enhancing compounds which would not be extracted during the mash preparation.  When distilleries became large and with the advent of the column still the requirement and willingness to use this technology was lost to antiquity.  In fact some whiskey manufactures nowadays intentionally boil over their fermentate to modulate sweetness. When the EU technical file Irish whiskey manufacture was written (by the multinationals) this artisan process was not included even though mass production techniques such as chill filtration and steam cooking were included.  We also oak filter our products though a bed of charred oak.  This is somewhat similar to the filtration process using in USA whiskey production but the oak has not been totally pyrolyzed (i.e., converted to charcoal).   The class of chemical changes occurring during the filtration are exactly the same as those that occur during maturation and charcoal filtration (oxidative, additive, extractive and a combination of all three).   The act that we apply these two handcrafted and artisan steps means that, until we mature stock to 5-7 years, we have to adhere to the Spirit Drink sales denomination.  In essence I do not have an huge issue with this.  The multinational operators have realised myriad of spirit drinks without anyone taking exception to it but when smaller operators do some for genuine survival reasons rather than an endless thirst for profits some people take issue.  These are the cards that we have been dealt and we have to roll with them.”

Cheers, John, and thanks for the info.