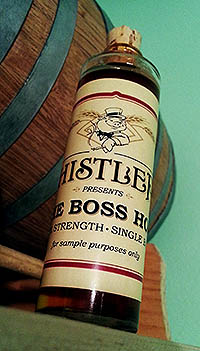 I remember buying my first bottle of WhistlePig 100/100, shortly after it hit the shelves near me in 2011. The word Vermont appeared five times on the label. It was only after I brought it home and spent some time looking at the bottle that I noticed the word Canada also made an important appearance, but only once. It was Canadian whisky, after all, merely bottled in Vermont after Dave Pickerell stumbled onto it. Canada Canada Canada Canada Canada Vermont. Marketing at its most deceptive.

Another common rumor surrounding WhistlePig, is that it’s the flavoring whisky from Alberta Distillers. They’ve been making a well-known 100% rye-mashed whisky there for longer than ten years and in a fashion that allows some of it to be marketed in the US as straight rye. Another Canadian spirit bottled and sold as 100% straight rye in the US, Masterson’s, comes from Alberta Distillers and boasts a familiar description, so Alberta becomes the obvious target for speculators.

The difficulty of mashing with solely rye is what makes it a rare style. Commercial enzymes that whisky distillers typically use to boost their mash don’t work very well with rye, and without any help, cooked rye turns into a foamy, sticky, hard to distill clump. Not only that, but unlike corn mash, which leaves relatively little mess in the still which can be removed by running a light caustic or acidic solution through, rye mash leaves a film on the walls that requires actual scrubbing to remove. Proteins and excess glucans are the main culprit behind the stickiness and enzymes that attack the small number of starches in corn and barley don’t find enough familiar material to break down in rye.

Alberta Distillers, one of the big two Canadian operations to find a workaround, took a page from sake and shochu producers in Japan who were tasked with fermenting difficult starches like rice, awamori, sesame or chesnuts. Those manufacturers use a variety of aspergillus mold called koji to break down difficult starches. The mold creates unique enzymes that help with that specific type of grain and make clumpy porridge, like mashed rice, turn into a usable soup that flows more freely through the still. In like fashion, Alberta Distillers bred their own variety of aspergillus that feeds on rye and creates enzymes especially suited to helping break down the grain. These customized enzymes do more to the mash than traditional enzymes, turning cell walls and other non-starch parts of the grain into fermentable substances, increasing the yield.

Now, whether or not WhistlePig’s whisky is really from Alberta Distillers is still unconfirmed, and official sources are forbidden from mentioning the source. There are other 100% rye whiskies older than 10 years in the US, right now, so it’s not an impossible feat or a completely extinct style even. There are even other, younger Canadian distillers running 100% rye mashes. It’s not unlikely that a distillery might play a few cards close to their vest, either. There may have been another Canadian distillery quietly running a 100% rye all along.

However unlikely it is that WhistlePig is not Alberta Distillers’, I’d hesitate to argue with the real authority on Canadian whisky, Davin de Kergommeaux, when he points out that Alberta Distillers and Hiram Walker are the only two distilleries in Canada that could possibly be the source. To play Devil’s advocate, though, Hiram Walker, like American brewer-distillers Anchor in California did for their Old Potrero line-up, chose the easy path and used rye malt in the mix. The enzymes produced by the grain itself are perfect for their purposes and there’s no complicated mold-breeding involved. If the solution were that easy all along, it’s entirely possible that someone else may have been distilling a 100% rye mash elsewhere.

Playing devil’s advocate to my devil’s advocate, with less than a dozen distilleries in Canada, the options are limited and the likelihood that it wasn’t Hiram or Alberta becomes less plausible. But enough waffling. WhistlePig ultimately needs this kind of confusion to make pushing its feigned American identity a little easier.

According to brand ambassadors, we may see an actual distillery up in Shoreham, Vermont, by 2014, though I’m skeptical, myself. Assuming it does happen, we’ll still have to wait however long it takes to mature after that before we see a true Vermont product with the WhistlePig flag on it. They may end up releasing a 5 year old, or judging by the small size of the farm and their insistence that they’ll be a farm-to-glass distillery, they may back-peddle and not release anything at all. By all accounts I’ve heard, it can take up to a year or longer to contract a still to be built for you, so the clock is definitely ticking for a 2014 setup.

My only hope is that WhistlePig doesn’t fall victim to the siren song of the mini-cask, like a few of Pickerell’s other projects have. When you put a profit thirsty businessman like Raj in charge of a distillery, it’s not unlikely that smaller casks might make an unfortunate appearance, and judging by the likes of Pickerell-led small-caskers like Sons of Liberty, King’s County and Hillrock, it’s a distinct possibility. We’ll see if the distillery he and Raj build will be able to carry the torch that anonymous distillery x has lit for them.

I like cask strength and I love rye, so this new release is a no-brainer.

The Boss Hog bottlings will be single cask releases from the same stocks that the flagship 100/100 rye come from. At the moment, official sources are saying they hope to release new bottlings yearly.

Until then, thank you, Dave Pickerell, for finding some fine rye whisky, and thank you to Connor Burleigh for the sample! 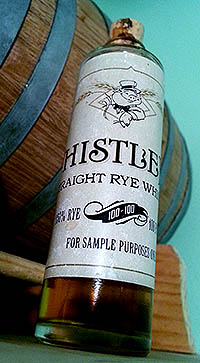 The WhistlePig story goes like this: after an appearance on the second season of The Apprentice, and then a failed run for a Congressional seat in Pennsylvania, Raj Bhakta found himself hiking the greenways outside of Vail, Colorado. It was a balmy day, one so comfortable that Raj decided to unfurl his bow tie and take a nap next to the trail.

He began dreaming about a giant trampoline made of tits, with tits jumping on it and splaying out against the sky.They were soft and warm, and the sun was shining. Tits were raining down from the heavens and bouncing off his face. The dream seemed to go on forever… and then he was jarred awake from his dream by a disheveled, seemingly-French mountain-biker who was passing by.

The wild man stopped his bike, walked over to Raj and began shaking him by the lapels, screaming, “Could eet be a wheestle teet? You know… wheestle teet? Like this?”  He made a few puckering noises and undulated his hand before disappearing back down the trail. It was a bewildering moment, one Raj would never forget. I mean, “What the heck is a whistle tit?” 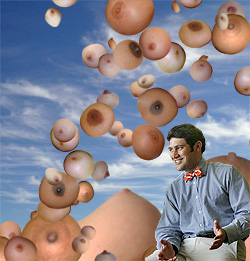 Shortly after that, Raj met Dave Pickerell, a former Maker’s Mark distiller who had recently found what he declared to be the world’s best rye and was seeking an outlet to showcase his discovery. After Raj and Dave joined forces, they began to build their whisky company on a farm in Vermont.

Reflecting back on the disheveled man’s declaration, Raj chose the name WhistleTit… er… I mean, WhistlePig. Wait… um. Okay, so I may have gotten some of those details mixed up, or even made them up entirely, but whatever; this whisky is definitely the tits and it was, indeed, a wandering Coloradan’s bizarre inquiry that gave the distillery its name.

For the curious, whistle-pig is slang for groundhog… sweet, delicious groundhog.

Palate: White pepper towards the end with nutmeg and honey upfront. All of the apple peels build up and make way for ginger vapors in the finish. Some of the suntan lotion makes its way to the palate, but leaves most of the coconut behind.

The WhistlePig 100/100 is a very sunny whisky. It’s bright, clean and uncharacteristically mild for a rye; very accessible for someone who might not have developed a taste for the heady, knee-breaker rye whiskies. It’s aged in new charred casks first, and then in used ex-bourbon casks making it a hybrid of sorts, a milder rye without quite as much of the bold and cooling mouthfeel a straight rye usually exhibits.

I’ve seen it sell for $80 a bottle, but the most recent sightings I’ve made have seen it for around $60. It’s uniquely great stuff, but I still wish it were even $10 cheaper than that.

Thank you, Connor Burleigh, for the sample! Cheers!!!