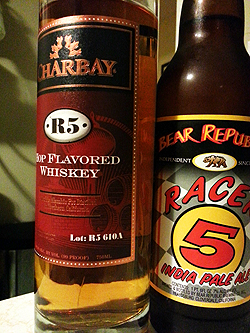 This is actually Charbay’s second line of “hop flavored whisky”. Charbay’s first foray into hopped whisky was distilled from a pilsner, dry hopped right before distillation for an extra hoppy kick, and then aged in new American oak. Only 24 barrels worth was put to cask and so far only 7 of those barrels have been to the market. I tasted a spot from the second release of these barrels and it was indeed a peculiar drink. At the distiller’s own $325 price tag, with only a few lost bottles kicking around, you probably won’t get a chance to try any… which is a shame. We’ll probably see a third release, who knows when, but if your more moderately funded curiosity is burning a hole in your pocket, then you’re in luck; they recently released another wave of hopped whisky called R5.

Unlike the first experiment, for the R5 they used a batch of Bear Republic’s Racer 5 IPA, a hoppy brew with tons of grapefruit, sweet cedar, berries and puffed rice flavors floating around. I would say that this round of whisky is even hoppier than the first, though memory can be suspicious and I was not lucky enough to taste them side by side. They claim the R5 was double distilled in a pot still and aged it in ex-Chardonnay French oak. They also released the unaged spirit as R5 Clear.

Nose: Hops extract, honeyed cereal, grapefruit, berries… pretty much all the notes from the beer but with some vanilla, apples, honey, coffee and fresh popcorn. Toasted grains. Lots of green flavors on top with a very malty foundation.

Palate: Again, hops is the first and loudest note, followed by some cedar sharpness and a wisp of smoke on the finish. Peppery and hoppy with some lemon and dry grapefruit. Oddly, I find a little root beer… and hops. Did I say hops? Hops stick around for a marathon finish. If you like IPAs then this will knock your socks off.

EDIT 9/4/2013: I would like to take a minute to address the phrase “hop flavored whisky” on the label here. This is not purely a hopped-mash beer, distilled and then put to cask. Somewhere else along the line, the R5 spirit is being adulterated with additional hops and because of that additional treatment the TTB requires it to be disclosed.

EDIT 1/25/15: Whisky Advocate just finished an article titled “Whisky Born From Beer” which echoed my article “The Fifth Ingredient” but convinced Marko to confess to dry hopping the spirit int he cask.