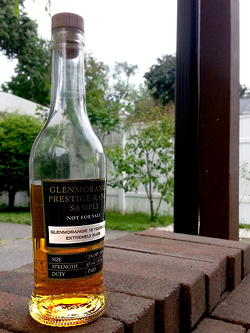 I like my whisky like I like my steak; well-aged and extremely rare. I usually hit them with some salt and pepper, and then throw my steaks on a plate in the fridge for at least two days before grilling them. It dries up the outside layer, which is crucial for developing a nice crust, and pushes delicious salt through the cell walls of your cut. As with single malts, good steaks take time and patience, and shortcuts are their undoing.

Why do I bring up steak? Well, extra meaty steak and sherried whisky are a great pairing… plus this one has a subtle black pepper in the finish that makes me think of flame-licked salt crust.

The 18 year spends the first 15 maturing in American white oak casks. After that, a bunch of the casks are transferred to Spanish Oloroso casks. Then, when both parts reach at least 18 years old, they get married and bottled. 30% of the Oloroso finished stuff makes it into the mix and the rest is their normal American white oak matured spirit.

Nose: The nose is so rich on this one that it makes the world smell better after picking your nose up out of the glass. It’s much nuttier, maltier, and with more dried fruit, than the 10. The sherry spice is very obvious… and delicious. Roasted brie with almonds and honey. Juicy plums, jammy figs and hidden kiwi. Bunches of fresh grapes. Milk chocolate. Sweetly woody, like a birch drawer filled with orange mulled wine and banana bread. For moments I almost think I can smell salt and pepper, too.

Palate:  The less expensive Glenmorangies usually have a gentle palate and don’t dare to be too audacious; this one works out to be considerably bolder. It’s sweet at first, then cooling, tinged with rich, spiced banana, raisins and a drop of bright tree resin in the back of the throat. A touch of peppery arugula bitterness rounded out with some sweet chocolate. Slightly dry finish with traces of  burnt caramel, black pepper and grape bubble gum.

The 18 Years Old Extremely Rare is very well constructed, with just enough sherry influence to make it rich without being rubbery. I do kind of wish it cost less than $95, though that criticism is for purely selfish reasons. There are plenty of other respectable 18 year olds ringing up for around $100 that aren’t quite as delicious as this. Taking some vocabulary from my beer drinking buddies, Glenmorangie is bottling a very sessionable single malt here.

Thanks David Blackmore and Gretha Smart for the samples!