This is the Port finish in Glenmorangie’s wood finish line. I love a good Port finish. They’re always so rich and darkly fruity. This one is no exception. Like the other two extra-matured bottlings, this one transitioned to a 12 year age statement around 2010.

Quinta is the Portuguese word for the farm where they grow grapes to make Port, and Ruban is Gaelic for Ruby, so Quinta Ruban, more or less, means Ruby Vineyard. Unless you speak Spanish and French; then it means Fifth Ribbon.

A significant detail, Glenmorangie uses the tallest stills in Scotland, which is one of the factors they attribute their sweetly pure spirit to. The idea is that the taller the still is, the lighter the spirit has to be to make it to the lyne arm, so all the heavier congeners stay in the pot and don’t make it into the spirit. The necks alone are only a few inches shy of a whopping 17 feet tall! Between the number of them and the height, their still room looks like a shiny, copper giraffe-orgy. 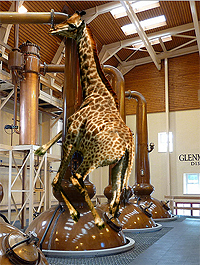 After the spirit is distilled, they age it for ten years in first and second fill white oak, like their standard spirit. Then they move it to Port pipes for an additional two years to drink up all the Port influence and infuse it with a hearty red glow.

Nose: I’ve never seen one before, but I imagine this is what a purple gummy bear would smell like… marinated with port in a plastic bucket. Wintergreen pops up in the back of my nose, along with the classic Glenmo’ nutty apricot. Raspberry caramel, and while it’s very dark and fruity it’s also a little earthy. Black licorice opens up as you drink some.

Palate: Grapeheads candy (which were way better than Lemonheads, in my opinion), but overall, this is not as sweet as I though it was going to be. Restrained. Nutty with dried fruit. Raisinets, small oak-y cinnamon and licorice medallions in the finish.

Thanks, David Blackmore and Gretha Smart, for the bottle!