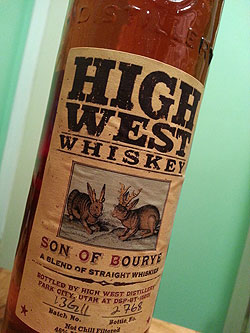 I’d like to start off this next wave of reviews about High West with my least favorite of the bunch: the Son of Bourye. The Son is the sequel to the original Bourye. As the name suggests, it’s a younger incarnation, but still a blend of straight Bourbon and Rye whiskies, this time from Four Roses and LDI respectively.

A lot of people want to attribute the Bourbon/Rye blending concept to High West. Both Wild Turkey and Jefferson’s recently released new Bourbon/Rye blends after the Bourye, so the obvious thing to say would be that High West was the first to come up with the idea and inspired a new genre. While High West may be the first in recent times to visibly market such a product, I still can’t help but think of another prominent school of whisky thought that may have arrived at that idea before them.

While Rye is the colloquial term for whisky there, Canadian distillers actually began their distilling history with wheat. Wheat makes a very mild, subtle whisky, so when they discovered that adding a splash of rye gave it more of a kick, the practice took off and the term became the Canadian status quo. Incidentally, corn replaced wheat as the new grain of choice up north, and this mixing of corn-based and rye-based whisky is just one of the reasons why most Canadian whisky bears the term “blended” on its label when it arrives in the US.

Of course, there’s a little more to it. Bourbon is an American product, and the whisky being “blended” in Canada is usually a mix of bold straight whisky much like our rye, blended into a mild base whisky which is very unlike our Bourbon. The two parts are very different, so adding one to the other provides complexity. In that respect, the Canadian style makes more sense to me than what High West did right here.

Lots of Bourbons use rye in the mashbill already, and conversely, lots of Ryes also use corn. There’s a grey area where the two can be very similar. For instance, in the US, a Bourbon can use a mash that’s 51% corn and 49% rye, and a Rye can use a mash with reversed proportions, 51% rye and 49% corn. There’s only two percent difference in the ratio, but they are legally two different products. Why mix them if they can be so similar already?

For me, this whole thing is like mixing Coke and Diet Coke. Either you want a bold, sweet Coca-Cola or you want a low calorie soda. While it seems possible that some people might want a few less calories than Coke Classic and a little more taste than Diet Coke, that crossover market isn’t actually as big as some might think it is. People reaching for a low calorie drink don’t want the extra sugar, much like how people who hate the taste of Diet Coke won’t find a Diet Coke blend any more appealing. Coca-Cola did try to market a middle-ground soft drink before. It was called C2. You don’t remember seeing it on shelves? Well, I imagine that in a few years we’ll see the Bourye novelty move in the same forgettable direction.

Nose: At first it’s like a bag of rocks but then it opens up to honey. There’s a vegetal, flinty note. Its sweetness is reserved and only opens up for moments. An old graphite smudged pencil box filled with custard and garnished with a sprig of huacatay. Extremely distant raspberries and pear with a pinch of cumin salt.

Palate: Drier and woodier than expected, like I took a spoonful of the custard from the nose but it was pencil box flavored custard made with wooden eggs. The fruit is more of an after-thought behind the first sip but builds up as it goes. After a few sips the raspberries come out. Medium, short finish with some numbing.

There may actually be a reason for mixing the two spirits, though. A good whisky is a good whisky, no matter what it’s made of. If the two stocks they chose made sense mixed together then it’s a win no matter how the government forces the company to label it. Unfortunately, I just wasn’t impressed with this particular result. I do, however, think the way they marketed this whisky was smart and helped the product reach further than it would have as a simple blend of straight whiskies. It gave bloggers and marketing guys a romantic theme to write about, an easy target, but for me, the novelty is just that; novelty.

Thank you Katie Flanagan of High West for the bottle. Cheers!