Hillrock is not easy to find. Depending on which direction you’re coming from, you may miss the sign. It’s less than two feet wide, on a fence, perpendicular to the street, facing only one direction and tucked beneath some trees. That’s part of the charm; by the time you find Hillrock, you’re still not sure that you’re there. Unless you were close enough to smell the fermenting grain, you probably wouldn’t even realize it was a distillery. The farm-able acres surrounding them make the two small buildings wrapped around one arm of the driveway look more like storage for farming adjuncts than a distillery.

That’s not to say the facility looks very rural. It’s neat and clean, boasting state of the art construction and arrangement, probably a by-product of owner Jeff Baker’s degree in architecture. Once inside the buildings, it’s even nicer. If there’s one thing you can say about the distillery, it’s that it’s beautiful. I wish I lived in the house on the hill, a historic grain merchant’s abode shipped in from afar. Hell, it could be a tool-shed on the hill and I’d still be envious; there’s a gorgeous distillery within walking distance and so many acres that my dogs would never run out of exciting new places to poop. 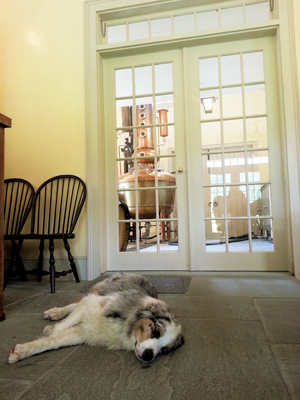 Sitting down with Baker is quite an experience, as well. His laid back demeanor pours over into every detail of his distillery. He’s got enough money to keep his operation running without having to make any of the difficult choices most other start-ups grapple with. They buy their corn because it would take up too much space to grow it, but all the other grains they use are grown on site. They could buy malted barley, but the idea of malting their own was romantic enough to warrant building their own on-site malting floor. In-house malting operations are extremely rare today. The desire to create a farm-to-glass spirit is commendable on its own, but when questioned about whether or not they use non-gmo grains, Baker’s reply was that whisky is too profitable to take shortcuts. Too profitable! According to his experiences, wine is a much more expensive commodity and producing on this scale wouldn’t see much of a return to switch to the slightly cheaper gmo ingredients.

Besides whisky, there is history being made here. The TTB approved the nation’s first “weighted age statement” for their Solera Bourbon project. To understand what that means you need to understand Solera, first.

Solera is a fractional-blending technique used more commonly for sherry and rum. Though brandy, vinegar, beer and single malt have all seen Solera-type operations come and go, Hillrock was the first to make a “Bourbon” this way. Each operation does their’s slightly differently, but the general gist of it is that you empty a portion of an older cask or tub, the Solera vat, and then refill it with a portion of liquid from a younger cask that had been aging. Then you top off the younger cask with new liquid and wait. When you’re ready to bottle from the Solera vat, you only bottle a portion of it and leave a fraction of the old spirit in the vat. Then you top off the Solera vat with liquid from the other, younger casks, repeating the process by topping those off with fresh new liquid. There can be many levels of casks going into other casks or several casks of the same age being blended into larger casks that are never completely emptied. There are other influences depending on the exact method of fractional blending, but the universal concept is that the last cask, the Solera vat, will always have a mix of increasingly old liquid in it, creating a complex product that stays more consistent over years of production once the whole thing has been running for a while. 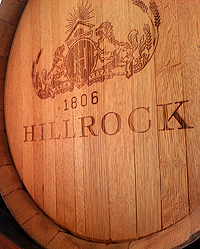 Here at Hillrock, they start with a high rye Bourbon mash, 49% rye, the most rye allowed while still being able to call it Bourbon. Then they fill their Bourbon new make into virgin charred mini-casks (I believe they said around 2 liters). After a few weeks they consolidate those small casks into slightly larger ones, over and over, graduating sizes until they eventually make it into full-sized 53 gallon barrels, the eponymous Solera casks. All the smaller casks up to this point are sold. You can actually buy them from the distillery. When the time comes to remove the whisky from the mixed up Solera casks, they make sure not to empty them all the way, but that’s not the end of the story. Before bottling, they move portions of the Solera casks into Oloroso sherry butts for finishing. It’s quite a labor and material intensive process, which probably explains the ridiculously high price tag.

They had to wheel and deal with the TTB and prove they could reasonably keep track of their taxes owed, a very difficult task considering the mobility of the liquid, before the agency would let them put the phrase Solera Aged on the label. Normally an age statement has to be the youngest whisky in the blend, but here, in the weighted age statement, that number is disregarded and replaced with the word Solera because, while it’s possible to determine the youngest whisky in the mix, Solera Aged sounds sexier than one or two years old.

The Solera Bourbon is not the only product you’ll see coming from Hillrock’s still, but if you don’t live in or around New York or D.C. you’ll may never see anything by them at all. They make a Single Malt and distill a rye spirit created from George Washington’s recipe for Mount Vernon. There are also lots of weird experiments laying around, stored in hot shipping containers or laying in random places, that may one day create a profound enough impact to demand a new product. For example, there were a few casks that had over-oaked, so head of operations Tim Welly placed them into an Oloroso cask to see what would happen. Over a meandering conversation, he and Baker mentioned it and casually pulled a few samples to taste. It was delicious, partly a product of experimentation and partly a product of choosing a great consultant to teach them the craft in the first place.

Dave Pickerell jumped ship from Maker’s Mark to consult for the small spirits world. Whistlepig, Sons of Liberty and Mount Vernon have all hired him, to name a few. I can’t speak for any of the other spirit, but the single malt new make flowing off the still at Hillrock is amazing. It’s a shame that so many other craft distilleries release inferior new make to help realize early profits, while Baker was the one to decide to skip that step and patiently wait for his aged stuff to release. 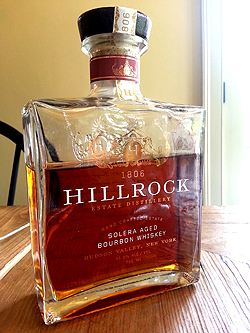 I will admit though, that when I visited, I was not impressed with the finished Bourbon or the matured single malt. They’re both very woody at the moment. I’ve never tasted an amazing whisky matured solely in small oak, and i’m not sure the last cask has enough time to do anything significant. Tim casually quipped about how “some people” think you can’t age good Bourbon in small casks, as if to qualify me for the tour. He was referring to the Buffalo Trace article and Chuck Cowdery’s write-up about it, which both confirm my own experiences with the small-wood short-cut maturation. All I can say is that this product may very well change in the future as the Solera casks get some more age in them. The single malt may not get better though; it looks like their fate is sealed, aging solely in quarter casks. Either way, the operation is small enough that a departure from these casks would not be impossible, or even very difficult. There are plenty of 53 gallon barrels and larger ex-Oloroso butts lying around.

All the people I met here were warm people, generous hosts willing to talk shop with anyone interested, but I have to ask: are these whisky-people or money-people? Somewhere, right now, someone is trying to angrily mail me a copy of Atlas Shrugged, but hear me out. This is Tim Welly’s first whisky gig. Before landing the job as distiller and head of operations here, he was a wine guy. Along the same lines, owner Jeff Baker is an investment banker who ran a restaurant and got into agriculture via a cattle operation before building Hillrock. The assistant to the distiller, who’s name escapes me, was equally fresh to the spirit and got the gig because her husband was one of Baker’s restaurant employees. I felt like most of Hillrock’s people are whisky amateurs, lucky enough to stumble into a paying educational gig lead by Pickerell and funded by Baker’s savvy investments.

Does being good with money mean you will make smart decisions for the drink? Is the economic clout it takes to hire a brilliant consultant like Pickerell all it really takes to make great whisky? Do they have enough capital to survive the next, impending whisky-bubble collapse? As other distilleries that started with small casks begin to move away from the practice, having learned the inevitable, will Hillrock be next? One can only hope. Time will tell if they’re up for the challenge. In the meantime, there are few, if any, small distilleries in the northeast as worthy of a visit as this one.