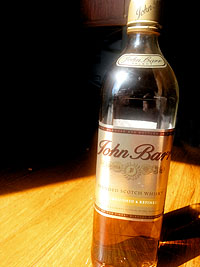 “You get what you pay for” is an axiom I can really get behind. Whether it’s that cheap Espresso machine you bought at Target that shoots dangerous amounts of water from every seam the first time you plug it in, or that coffee you got on sale at CVS which inexplicably coincided with the three worst bouts of diarrhea you’ve ever had in your life, it’s true; you get what you pay for. Now of course, it goes without saying that there are a few notable exceptions, but this isn’t one of them. For under $20, if you’re expecting anything better than poison, you should prepare yourself for a heaping dose of shame and disappointment the likes of which you haven’t experienced since the first time your grandparents saw that video of you getting awesome at Mardi Gras.

There are two other releases that bear the John Barr name. Believe it or not, there’s actually one release below this one. They say that they created this unholy line of whiskies to fill a gap left by Johnny Walker’s Red Label being withdrawn from UK markets in the late 70’s, which would explain the familiar colored label bottling scheme. The gold label is supposed to be their answer to the Speyside region.

Nose: Sour butter, rotten vegetal notes and lots of grain alcohol. Apples and raw lobster from a dirty tank. Wood shavings. It smells a little bit like it maybe has a good whisky in there somewhere hiding underneath an awful one.

Palate: Bitter. The palate validates my worst fears from the nose and the finish only gets worse. A little beer-y, definitely rotten to the point of unmixability; I can’t even make a decent cocktail with this one. Lots of grain alcohol and not a lot of redeeming qualities worth talking about.

This one would be great for cleaning or ruining whisky for your children before they get a chance to taste the good stuff.