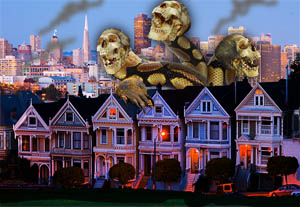 14:46 JST, Friday, March 11, 2011, the most powerful earthquake to hit Japan shook the island. At the bottom of the ocean, something woke up; something that had been sleeping for a very long time. The jolt triggered a tsunami that caused the meltdown of three nuclear reactors at the Fukushima Daiichi Power Plant in Ōkuma. Thousands of gallons of radioactive water spilled into the ocean. People scrambled as their cars and pets were washed away. Homes and lives were destroyed… and the Sleeper grew.

For three years, the Sleeper fed on other monsters of the Mariana Trench, waiting, biding its time, and growing in the increasingly radioactive waters there. When it outgrew its home, it began to journey east. Sometime in March of 2014, the Sleeper made landfall in Monterey County, California. It quickly cut a swath 200 miles north to St. Helena, where it laid waste to Charbay Winery and Distillery, stopping along the way to ravage Anchor distillery in San Francisco and St. George’s in Alameda. No distillery is safe from its fiery breath. No human is prepared to face the monster. Humankind is not ready for this. This whisky is a giant beast, the likes of which we couldn’t tame… but I mean, this is Lost Spirits we’re talking about here. Sounds like all systems normal to me.

Distiller Bryan Davis is still using Canadian peat and local barley, and he’s preserved his nefarious house style, but he’s taken the way he crafts his whisky in a new direction since the last time this blog visited him. Now, all his whisky mashes are fermented with salt water. He used brine from the nearby Pacific Ocean at first, but later opted for the convenience of Pacific sea salt. Why salt? Yeast can’t multiply in salt. Doesn’t that sound counter intuitive?

For starters, salt helps facilitate the separation of alcohol and water in the still. Salt raises the boiling point of the medium it’s dissolved in, and is around 500 times less soluble in alcohol than water. That means it has little effect on the ethanol while causing the water to take more energy to boil. As the distillation progresses, the salt concentration rises in the water, exponentially raising the boiling point, making it even harder for the water to evaporate, allowing for an easier cut of the alcohol. 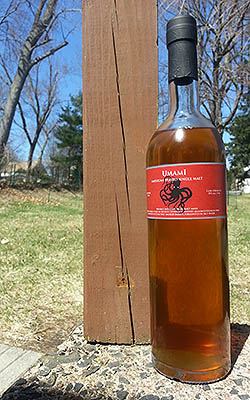 On a biological level, the salt provides a hostile environment for the yeast, causing it to build up its cell walls, up to eight times thicker, to withstand the barrage of cell-moisture stealing saline. The thicker walls mean the yeast is less able to split and multiply in the mash, so you have to grow your yeast to where you need it while it’s outside the mash first, but it also means that the yeast have more armor and thus can survive and continue producing alcohol to a higher percent by volume without dying from exposure to lethal concentrations of ethanol. This means more alcohol per batch with more yeast produced congeners in the mix, as well.

Most of the yeast’s processes happen through these cell walls, changing the dynamics of how it lives and functions. This affects how it creates different compounds, among which Davis hopes are a more complex series of mono sodium complexes, various salts with a bouquet of new salty flavors.  Among the eponymously umami compounds he hopes to create, are sodium acetate, sodium lactate, and sodium propionate, all compounds commonly used as food additives with mildly salty flavors. The second of the bunch, sodium lactate, is commercially manufactured by neutralizing lactic acid and can be used to treat arrhythmia and hypertension but can also cause panic attacks in those prone to having them; I defy you to find someone making whisky this bad-ass; a spirit that may just cause fits of existential terror. Awesome!

While I appreciate the bold new approach, the thing I admire most about this distillery and its team is the honesty. A short Godzilla-stroll to the north, Charbay hijacked a few hundred year old practice and claimed it for themselves, saying they were the first to distill a hopped beer as a mash, despite a precedent dating back to the 1700’s of people doing just that. These folks are part of the California craft whisky movement, zealously lauded by bloggers for pushing the envelope, but how far are they really pushing it? A couple hundred miles to the south, Davis asks himself, “what could I mix with my whisky mash that might kill a man on the cusp of dehydration? Eureka! Sea water!!!” As I write this, even, he’s still evolving, fermenting milk dunder for rye and harnessing the power of the sun in some bizarre, alchemical fashion. I can’t even keep up!

But make no mistake, Davis doesn’t try to take credit for being the first to distill on salt water. He’s actually doubtful that he’s the first. He stumbled onto the idea of using salt water while pondering a map of Scotland and trying to figure out how a barrel aged in Glasgow takes on an oceanic quality being so far from the ocean. Even barrels aged by the sea were perplexing, as salt can’t penetrate the pores of the cask. So where is it coming from? Are they pumping sea water into the fermenters?

One more curiosity, in Scotland, the stills are fixed or replaced every ten years as the distilling takes its toll, while over in France, there are Cognac stills that have been running solid for 90 years. You know what can cause metal to wear out faster than normal, don’t you? Salt. It was the possibility that ocean-side and island-dwelling distillers may be using sea water in a more direct way than they let on, which lead Davis to investigate. Eventually, after he finishes piecing together his forensics lab at the distillery, he plans to see if he can find the tell-tale chemical markers that would give away the secrets hiding within. Saying that I’m eager to hear about his results is a colossal understatement.

As for the whisky itself, this bottle of Umami shows significant growth in the Lost Spirits house style. I’m definitely digging it. I can’t quite figure out if Davis is a scientist or a madman. Perhaps he’s a little of both, but either way, whether or not the world is ready for what he has to offer, I have a feeling we’ll see his name associated with the discovery of some wild advance in whisky, soon. Stay tuned!

Palate: Fiery and resinous with the drift wood from the nose. It sticks with you for a long time and eventually finds itself seeping through every cell in your body, until you can practically taste it with your skin. Fistfuls of lovely pipe tobacco stuffed into a sun-baked bike tire. Savory eggplant, tomato skins, and musky cologne. The finish is raw capsaicin on the sides of your tongue with loads of sandalwood, and just as the monster trails off, it leaves you with a hint of cocoa powder.

This is the new badge and category I’ve created especially for the Lost Spirits team to celebrate what I would call their best batch yet: “Recommended but Evil”. Life is short. Live a little and leave no room for regrets. Grab the beast by the horns and confront the terrors of the world, because really, nothing will ever be as terrible as the monsters within. Plus, once you’ve seen what the depths have to offer, you may be surprised to find yourself coming back for more.

Many thanks to Bryan Davis for the bottle. Cheers!