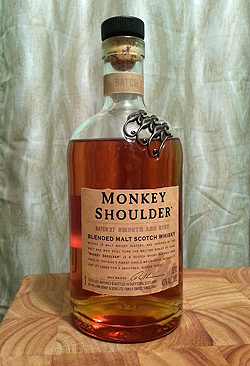 This is blended malt Scotch, a mix of the well-known Balvenie and Glenfiddich, and the relatively unknown Kininvie, to be exact. Batch 27 is a reference to the number of casks they mix for each vatting. The whole operation is overseen by William Grant & Sons’ David Stewart, the man who pioneered two-cask maturation of single malts in the 1980’s working on new ideas for Balvenie.

I’ll admit it; sometimes I can be a little immature, which shouldn’t be a surprise to my regular readers. I can’t go grocery shopping without stepping up on the wheels of the cart and skating across the parking lot. I pick at my bug bites. I can’t help but immediately rub my eyes when someone says, “Hey, don’t rub your eyes!” Worst of all, I’m a sucker for marketing trinkets, especially things glued to things, and this bottle really gets me in that respect. There’s a small metal medallion of three piggy backed monkeys on the shoulder of the bottle. Sweet! Stuff to pry off of stuff and then put in that drawer I never open!!! 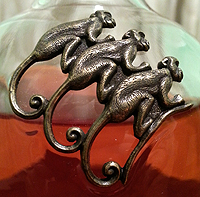 As for the name, Monkey Shoulder was a repetitive shoulder injury men acquired from shoveling malted barley in the olden days. The temporary injury would make one shoulder hang lower than the other, causing the afflicted to look a little bit like a monkey when they walked.

There are actually many lesser-known animal/body-part afflictions that affect people of whisky. For instance, there’s Flounder Toe, a condition suffered after dropping a full cask on your foot, very similar to the lesser known but equally painful Squid Hand. There’s Donkey Face, which is a colloquialism for the nerve damage one suffers after falling into a tub of fermenting mash. And then there’s my personal favorite… Dog Butt. We’ve all had this one, before:

You were out with your buddies, got a little over-zealous, and had a few too many before 9:00 pm. Then you needed food. Of course you were completely beyond making something for yourself at home and the only place that your cabbie knew was definitely open was that run-down Del Taco over by the shady side of the airport. The next morning you expected a redemptive hangover the likes of which you hadn’t felt since that time you drank all of your roommate’s Mad Dog 20/20 and woke up under a trestle… but instead, miraculously enough, you only have a sour stomach and a terrible case of Dog Butt. You and your roommates spend a few hours collectively wishing you had a hangover instead. After a day or two, things eventually work themselves out. Don’t pretend that you don’t know what I’m talking about.

There is no effective treatment for Dog Butt, but thankfully it almost exclusively affects people who drink like assholes, so by consuming with respect and moderation you can send this condition the way of the Monkey Shoulder and help make this a whisky-ailment of days past.

Nose: Hordes of dandelions, some other darker floral notes I can’t quite pinpoint, hazelnut and napthalene. The nutty and floral aspects are the dominant points, but digging in I also find banana and Chicken McNuggets. It smells like I’m not going to like it at first, it has some mysterious dark chemical to it, but after spending some time with it the Balvenie really comes out and it becomes charming.

Palate: Blunt with a tiny bit of fruit in the vapors of the finish. Pineapple lurches along inside an old person’s winter closet, like a wool coat with a splash of English Leather cologne. I would describe this as a reminds-you-of-your-grandfather malt.

This is a blended malt, marketed more for mixing, but for $30 this is nice for sipping, too. If you have a hard time seeing what’s great about this one, which you may, try rubbing a few drops between your hands and then smell them before returning to the glass.