Ever the proud Yankee, I’ve been slowly whittling down my New England clam chowder recipe for a long time… and I don’t mean that thick, floured goop you think I’m talking about. I didn’t say clam gravy. I said clam chowder, dammit. True chowder. The stuff the old school, New England settlers made. It’s been one of my absolute favorite things to make since well before I realized that it paired so well with single malt Scotch.

This dish plays well with any single malts that have an oceanic quality to them, so Talisker, Highland Park, Jura, or any Islay you can think of, all drink very nicely with it. Each has their own nuance to bring to the table, but the iodine from the peat and the phenolic brine from the clams blend into one another seamlessly. The unctuous creaminess of a well made chowder can stand up to the high proof, and the smokiness of whisky practically begs for a strong mouthful of ocean. This is a downright sacramental experience.

Chowder’s is a tragic story, though. Somewhere along the way, chefs trained in the French style stopped making chowder and started making bechamel garnished with chowder constituents, loosened up with canned clam juice. The texture and flavor was similar enough that not many people could tell the difference (or cared), and soon, even people from New England began to associate their historic culinary contribution with this new, pasty impostor. Real New England clam chowder does not use flour to thicken it. It relies on potatoes for thickness and milk or cream for it’s velvety smooth mouthfeel. 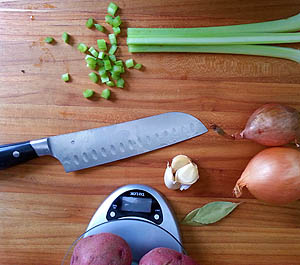 Making it from scratch is a lot of work, but other than the time you commit, the process is very easy. The most important step is making your clam stock. Toss that bottled crap out the window; it’s for lazy dullards. Coaxing nectar from clams using gentle steam is about as simple as it gets and bottled clam juice will not give you the same results.

Traditional clam stock is made by steaming clams in a small amount of water. I prefer to use a little corn stock. Real clam stock is also very salty, so corn sugars add some complimentary sweetness and help to mitigate the saltiness of these ocean dwelling bivalves.

Corn stock is one of those secret ingredients that will give your recipes an extra boost which your guests won’t quite be able to put their finger on. Each summer I vacuum seal and save all my corn cobs in the freezer for use throughout the year, but even crappy winter, supermarket corn has a cob that can make a decent stock. For convenience you can even make a large batch of corn stock and freeze it for later use.

If you’re feeling adventurous, try garnishing your bowl with a few drops (I said drops, not a splash) of single malt. While this is a great pairing with any oceanic flavored whisky, even without the whisky garnish or pairing, this is one delicious chowder.