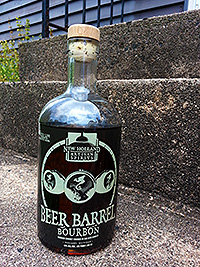 The New Holland Brewing Company began brewing beer in Michigan during the mid-90’s. In 2005 they used their brewing insight and took to distilling, but they didn’t just stop at whisky; they ran the well and started making rum, vodka and gin, too. At the moment they have six other whiskies and two whisky-adjacent fringe spirits in their portfolio, one of the latter is a pumpkin ale they distilled and cask matured. I love it when curiosity drives someone to fill their stills with something different… however, right now the corn and barley skeleton for the Beer Barrel Bourbon is outsourced from a variety of other distilleries. Rich over at New Holland informs me they’re busy laying down lots of Bourbon, though, so in the coming years we’ll see a transition from sourced to a completely in-house release. Take this review with that future variation in mind.

For now, New Holland’s main contribution to this whisky is finishing it in casks with a confusingly recursive history. The casks were originally sourced from another distillery’s spent Bourbon supplies (I’ve read other bloggers say Heaven Hill, but New Holland would not confirm when I asked). Then, the company’s brewing operation used those casks to age their high-gravity Dragon’s Milk stout. After that they put aged Bourbon back into the ex-stout cask that previously held Bourbon; Bourbon finished in ex-stout, ex-Bourbon casks. It’s like a stout on Bourbon sandwich.

Now, an ex-stout cask-finish does sound undeniably sexy, but it got me thinking and now, more than anything, I want to see a Bourbon (or maybe even a rye) finished in a barrel previously used to age Root Beer. I think the bold, punchy flavor would make for an interesting contribution. Will the New Holland Brewing Company oblige? Probably not, but one can dream.

Nose: Dark crystal malt underneath a heap of sour woodsorrel, roasted carrots, and broken pencils. Earthy, musky and a little bit like a well aired-out, faded paperback. Bready from a distance with dry chocolate and toffee crumbles as you get closer to the surface. Washed out, yeasty hazelnuts and green apple hops. Orange jam on almond cookies if you really dig, but it’s all a bit muted for Bourbon.

Palate: Lukewarm. Very mild with cocoa nibs and slightly bitter cereal notes from the beer. The pencil shards are plentiful here, too, with a sprinkle of toasted hazelnuts. The stout is even bigger on the palate and finish with some light pepper and woodsorrel greeness as it draws to a close.

Overall, it’s very mild once you start drinking it. It seems like the beer might be muting some of the classic Bourbon kick and it’s got a flat, creamy mouthfeel like a good, room-temperature stout. Skip the snifter and serve this one in a Glencairn for maximum appreciation.

Thanks to Rich Blair at New Holland Artisan Spirits for the bottle! Cheers!!!