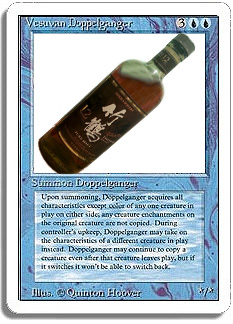 The Nikka Taketsuru 12 year seems to be a polarizing whisky in the blogosphere, and whether people love it or hate it nobody seems to be talking about the obvious pepper to it. I’d swear they put some cayenne in here for a little kick. Am I going crazy? There’s a distinct possibility that I might be.

The first three times I sat down to take notes on it I wrote three very different reviews, with only a few common threads. I feel like I agree with both sides of the argument, that it’s good and mediocre at times. I began to wonder if my nose wasn’t having trouble on most of the days I didn’t like it, but in reality, each sitting I wrote for went from opposite extremes and back again trying to describe it. This whisky is like a peppery Vesuvan Doppelganger:

Nose: Starts off a little farmy with a touch of squid before turning into lime and blueberry ceviche. Then again, sometimes it starts off with sweet pear and tons of malt before morphing into dehydrated apple chips. It almost smells mildly peaty, the way Johnnie Walker Black does. After a few rounds it moves into smoky/earthy territory with some paprika and cayenne pepper. It is all of these things but never all at once.

Palate: Not as sweet as I expected it to be. At first, it’s very subdued with flat malt. You can pick out hints of lime, but by the time you’re there it slips into smoked Thai chili peppers and gritty Mexican chocolate. The capsaicin builds. If you stop drinking for a bit, the finish kind of tastes like you ate a whole roll of Lifesavers candies a few minutes ago and the citric acid is still lingering. The finish is all cayenne, paprika and chocolate.

A strange whisky indeed. This is a blended malt; a blend of single malts from Nikka’s two distilleries, Yoichi and Miyagikyo. Perhaps the disparate releases that make this one up are fighting for control. Alcohol isn’t a homogeneous substance and I definitely find two distinct, dueling spirits locked up inside this bottle.