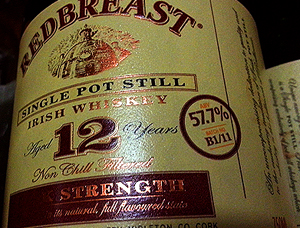 Ireland is a curious spot in the whisky world. The laws there have had a history of being notoriously lax, often creating exploitable confusion about what certain terms mean, case in point, the Irish term Single Pot Still Whisky (formerly Pure Pot Still Whisky). One would think that calling it Irish Single Pot Still Whisky would mean it was distilled in a single pot still… it does not. The term is actually more about the mash bill.

The term and style came to be from a creative volley between the distillers and excise men of Ireland. Distiller’s had been hiding the whisky they distilled to avoid being taxed for it, so excise men put forth a tax on malted barley making it more difficult to evade taxes on their production. Taxing the raw materials made it harder to hide how much distillers were producing.

Ever the crafty bunch, distillers began using less malted barley and began padding their production with untaxed, un-malted barley. The enzymes from the malted barley helped break open the proteins of the unmalted and turn the carbs into sugars, but the un-malted barley still gave the whisky a unique body and flavor profile. This blend of barley types is, more or less, what makes an Irish Single Pot Still whisky. Not that there are very many distillery groups operating in Ireland today, but at the moment, there’s really only one group distilling in this style; the Irish Distillers Group.

Nose: Lots more birthday cake and vanilla tower over the fruit which is hiding a little more in this one. The grassy notes are meatier here than in the standard 12, too. French toast type custard. Hay and a little chocolate. Water unleashes coconut and fruity pebbles.

Palate: Lots of oak and almond. Confusingly, the standard 12 year has more fruit in the nose and not so much the palate, while in this one the fruit is buried under the vanilla cake in the nose but finally makes it to the party with a huge posse when it reaches the palate. Said birthday cake comes afterwards in the finish. Water won’t break the palate on this one, but it’s a tough call to say if it’s better for the addition.

This Cask Strength bottle is not only a higher proof than the primary 12 year, but also non-chill filtered; truly, Redbreast in the raw… and its amazing. Out of the three, this is my favorite.