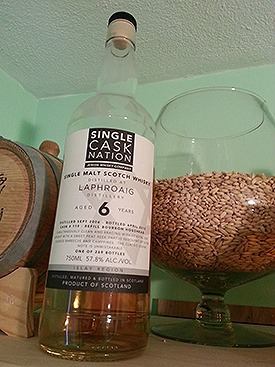 As previously discussed here, the Single Cask Nation is a member’s only club for buying single-cask whisky. Why pay to join a club just to buy whisky? It’s an honest question, but not hard to justify at all.

Aside from having access to the unique casks that clubs like these offer, casks chosen by folks who really dig awesome whisky, you get your money’s worth in liquor and merchandise almost immediately. There are other, well-known clubs that cost twice as much and only send you half as much whisky for joining, but the guys over here at the Jewish Whisky Company aren’t messing around.

Even better, now, unlike the first wave of founding members, you won’t have to wait an inordinate amount of time for your whisky to arrive. The earliest members waited for quite a while for the Jewish Whisky Company to iron out all the preliminary details. There was a bottling fiasco and a few, difficult economic decisions along the way. The bureaucracy around alcohol is grueling, and the logistics of shipping from overseas (and even within the country) demanding, but you won’t have to wait for that to sort itself out, now. There are six whiskies available that won’t make you want to stab your eyes out waiting for them.

But enough shilling for the Single Cask Nation. This Laphroaig, as Co-founder and President Joshua would say, is a stunner. It’s unusually clean for a Laphroaig. It’s 1 of only 269 bottles, and matured in a refill ex-Bourbon cask. It’s gentle and especially sweet for such a young malt. This would be a great gateway Laphroaig if it were available in larger numbers, but sucks to be you, it’s not. That’s just a part of the beautiful impermanence that is monocaskism.

Nose: Smoked corn chowder and wafts of fresh Autumn air. Bright and sweet like a floral latex glove or the waiting room at a dentist’s office. None of the classic Laphroaig paper mill but it still has a gentle iodine coupled with light caramel. Pecan wood chips, hints of nutmeg, and #2 graphite round out the nose.

Palate: Sweet sage-laced cigarettes. Candied tarragon and pineapple. It has a hot and sweet streak, then firm pecans with a nice, warming, vapor finish that sticks around. Clean peat and a tangy finish with echoes of Super Golden Crisp cereal.

How about a peat packed punch? Can’t get enough Super Golden Crisp. It’s got the crunch with punch.