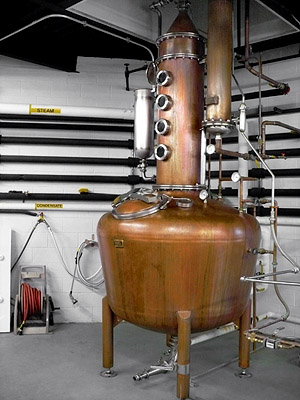 About a two hour drive from me, in the ocean punched state of Rhode Island, lies the Sons of Liberty distillery; A small operation that looks as if it could fit in two small rooms should there ever be a good reason to. There’s one hybrid still and one stainless steel mashing vessel, a couple of fermentation tubs, a few barrels on palates, a bar and maybe four of five people walking around… That’s about it.

One of the owners was formerly the master distiller for Maker’s Mark, so they have experience in the industry though they distill a few seasonal vodkas on top of their whisky production. Supplementing your whisky production with vodkas and eau de vie to increase profitability is common, especially for distillers in the northeast. I’m extremely stubborn about a few things in life, so I didn’t try any of the vodkas.

As for their whisky, a  handful of prominent distilleries have adopted the idea that good beer will make good whisky and these guys are on the same page. They look more to the wash than the cask for flavor development, fermenting a mix of dark and lightly roasted malt for about six days on average. The extra time gives the bacterial fermentation a little more time to build flavors. Their goal is to make a rich stout beer to distill, the idea is that the more rich and flavorful pre-distillate you use the more rich and unctuous the whisky will be.

Their initial release is aged for around two months in steel vats with toasted oak stave inserts. They’re about to release a barrel aged whisky in a few weeks, which has been aged for two months in actual oak casks instead of steel with inserts. They also alleged to have a seasonal release spirit in the works, a whisky that they used to macerated pumpkin pie filling before bottling. For $10 I got to try all of these and more.

Truth be told, I’m not a huge fan of their primary release. It’s very young and thick with chemical new make signature. There’s a touch of dry chocolate in the middle of the palate for an interesting second, but the youth is overwhelming. “cheap Tequila flavored” would be an accurate description, in fact, the gentleman on the tour even said it was a common comment for people to make. I’m hoping this one will get better with time.

The barrel aged release had a strong American profile, like Bourbon or Tennessee whisky. It had some apple, some vanilla and not so much of the sour, paint thinner smell to it as the frist one had. It was pretty standard for American whisky. Is it worth the suggested $40 price tag? I’m on the fence. I think I could go for another lengthy round of nosing before forming an opinion on this one.

The pumpkin they’re working on isn’t really a whisky, though it was surprisingly good. It had a greenness to it that really framed the spices well. Still, I would consider it more of a mixed drink than a whisky. This would be really fun for a good bartender to play around with. A guy standing next to me at the bar suggested mixing it with egg nog and a few shavings of fresh nutmeg. 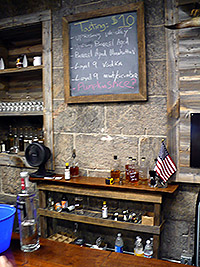 It has to be said: My inner whisky nerd cringed a little when they began discussing barrel inserts. Something about aging whisky in steel really bothers me, but those feelings were quickly washed away when I bellied up to the tasting bar and tasted a few of their other “experiments”. In line with their beer-centric approach to distilling, they’ve distilled a few different styles of beer. They’ve played around with distilling lagers, hefeweizens and a few hopped brews. I’m sure there are a whole host of other beers they tried which they didn’t bring up in conversation or have examples of on hand. The more we pried the more esoteric the whisky that he brought out became. I enjoyed the experimental whiskies much more than their market-ready ones, for this alone I would make the trip again sometime. There’s a lot of potential here in South Kingston and I can’t wait to see what they come up with in the future.