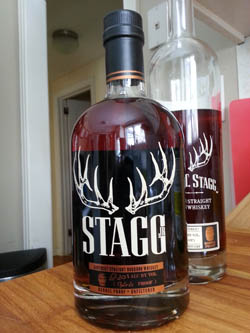 If the George T. Stagg is Charlie Sheen’s Twitter account, then the Stagg Jr. is Justin Beiber: that’s direction I wanted to take this review, but while the Stagg Jr. is certainly younger and doesn’t seem so traumatized up close, it’s not quite as out of control, so I’m going to have to abandon the metaphor.

The initial public reception seemed lackluster. The way that the George seems to have had a hard time making the public dislike it despite the rising cost and falling abv, I think the Jr. is living in its shadow and will never get the acclaim it ought to. In a George T. Stagg vs Stagg Jr. throwdown, it seems like it’s difficult for people to not compare the younger version to their love for the older one that made the name famous.

Personally, after comparing the two side by side, I’m not sure exactly where I sit, but it’s probably closer to the original. Both have moments when I like them and moments when I don’t. Both are over-priced, in my opinion. The younger version is better in some ways and worse in a few more. Most importantly, the psychotic resin-pepper is toned down in the younger incarnation. The Jr. doesn’t try so hard, and is certainly less complex, but I don’t feel like it just stripped all the fleshy bits off my throat after a sip. The next big difference is that there’s more vanilla in the original and much less here, which is tragic for the Jr. because the vanilla is my favorite part of both.

Another pleasant surprise, water is nicer to the Stagg Jr. The addition squashes some of the musty woody notes in the palate. The 2013 George T. Stagg is like a gremlin when it gets wet. It multiplies the resin and sour. The 2013 Jr. is… um… well, it (probably) won’t kill your science teacher. I wouldn’t drink either after midnight, though. Despite the more reserved demeanor, the proof of 2013’s Jr. is actually higher than the corresponding George T. Stagg.

Nose: Musty cedar and suntan lotion. Malty caramel cut with Vitamin B and loam. The umami is more like figs marinated in watered down fish sauce, now. Teaberry chewing gum and stale vanilla beans. Maple syrup over buttery Eggo waffles. Sweaty, bamboo-lined karate dojo. Plasticy, like the inside of a brand new Chevy Nova; no, not the cool third gen ones. I mean the 1985 hatchback piece-of-shit version.

Palate: This Jr. is definitely woodier right away and the vanilla beans, while still present, are smaller. The cocoa notes are also farther away now. Farmy and cooling, without the sour capsaicin of the original, also not as sweet. A touch more bitter with drying cedar that gets a little bit sweeter as it wraps up. Luden’s cherry cough drops with a long, numbing finish.

This one sells for around $50 and is “nearly a decade” old, so it’s on the pricey side, owing to the fame and hype of its predecessor; trend is the number one enemy of the whisky drinker. It’s supposed to be a tiny bit easier to find, though, and still strong enough that you could, quite effectively, mace an attacker with it. After it’s tepid reception, I would predict we may not see this as frequently as Buffalo Trace originally let on. If this were a $25 bottle I think consumers would have been more excited to see it.