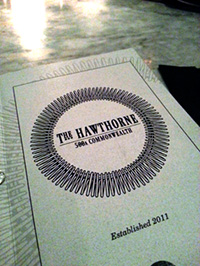 Back in May, after attending the Whisky Guild’s Boston cruise, I had the pleasure of joining a few bloggers, owners and ambassadors for some post-event cocktails at The Hawthorne, a swanky bar at the Hotel Commonwealth beneath Fenway’s iconic Citgo sign. It’s hard for me to be a proponent of whisky cocktails but the cocktail list and quality ingredients here make a very strong argument. Round top bottles and rows of premium bitters line the marble-top bar, enough to make even the most well-stocked apothecary jealous. Even if you’re not in the mood for a mixed libation, their whisky list is a well chosen mix of official and independent bottlings, and absolutely worth a visit should you find yourself nearby.

I started with a whisky cocktail called the Roscoe Pound. The eponymous Roscoe was a Nebraska native who later became the Dean of Harvard Law School just six years after he started teaching there. His tenure eclipsed prohibition and his contributions to law echo far into the present legal system. The drink was reminiscent of an unpeated version of Sam Ross’ Penicillin, a gingery-sweet citrus offering. The Roscoe is a smart cocktail with a smart name to match, but the next drink I tried would take things one step further and change the way I thought about mixing and crafting my own cocktails at home; that was the Lagavulin Julep.

You’ll often hear Lagavulin fans say mixing such a pricey spirit pains them, and in most cases I agree, but my attention was won over by the Roscoe Pound and this Scotland-meets-Kentucky scenario plays out quite nicely. Part of the draw for me was how Lagavulin had been my first, true single-malt-love. Before that, I considered whisky to be a terrible substance which needed to be exorcised from its bottle in quick swigs between basement jam sessions. Jack was top shelf stuff and the shot glass was the best vessel for consumption. The day I was presented a bottle of Lagavulin my world was upended, and the day someone showed me how much better it was in a proper glass started me on a journey that led to this blog you’re reading right now. While navigating the world of whisky cocktails hasn’t been as easy for me as exploring the spirit itself, the Lagavulin Julep was one of those victories that made all those other awful drinks I had along the way worthwhile. I wouldn’t be surprised if, when the ball drops for 2014, this ends up being the best cocktail I’ve had all year.

So who were the masterminds behind the drink? That would be the Hawthorne’s owner-manager, Jackson Cannon, and head-bartender, Katie Emmerson. Cannon comes with an impressive curriculum vitae. He’s traveled the world sourcing the best cocktail reagents he could find. He’s been on the ground floor developing some of the greatest bars in Boston. A menu thief and gastronomic historian, if you want to chew the fat about food or drink you could do much worse talking to almost anybody else. Emmerson also comes with her own impressive résumé. She came to Boston from New York to help open the Hawthorne in 2011, having spent time sharpening her skills among the famously awesome mixologists at Lantern’s Keep, The Raines Law Room, and Death + Company. A veteran Bourbon drinker, her expertise was put to good use experimenting with and constructing the Julep after brain-storming with Cannon. 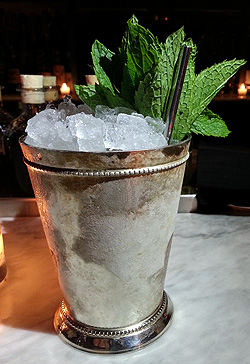 It seems like an obvious permutation, but it’s a brilliant one, and one that I’ve not seen anywhere else. Emmerson tried many different ideas, from experimenting with alternative sweeteners to spritzing different liqueurs on the aromatic bundle of mint, but the classic sang by itself without adulteration.

It all makes perfect sense. Peat wants to be sweetened. Grungy whiskies yearn for ingredients like honey, vanilla, bright citrus and sugar. The drink’s mix of mint and sugar sweetness is part of what makes the Lagavulin Julep work, but mint also has an earthy note that rounds out some of the earthiness in the whisky. The mix is bitter, sweet, herby and smokey, like a well-balanced dish, and it’s refreshing enough to serve on a hot summer day. That’s something not a lot of peaty whiskies have managed to do successfully. If you like peat and want to try an unusual mixed drink you won’t find anywhere else, then you need to try Katie Emmerson’s Lagavulin Julep:

Even though this is a relatively simple drink, don’t let that stop you from experimenting a little. There is room for variation. You could try any peated single malt, like Ardbeg or Laphroaig… maybe even an Octomore Julep if you were feeling particularly bold.  If you’re handy in the garden there are lots of different varieties of mint to play with, as well, from chocolate to apple, and I’ll bet many would be exceptional in this recipe. Either way, if you enjoy this drink and you’re ever in Boston, I would highly recommend paying them a visit; there are many more interesting whisky cocktails there to explore.

Cheers and thank you to the awesome folks at the Hawthorne for sharing their insight!!!

3 thoughts on “The Lagavulin Julep”