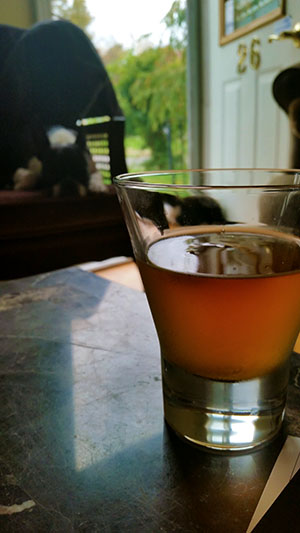 Now, in case you don’t live in a huge city and/or do have a “normal” job that keeps you from all that pesky, cutting-edge day-drinking you’ve be meaning to do; fat-washing is the term for infusing a liquor with a flavorful fatty substance. Simply mix liquor with hot fat, steep overnight, freeze, separate the congealed fat and strain through a cheese cloth. Alcohol can emulsify both fat and water-based flavor compounds, so the spirit will not only retain a subtle trace of the original flavor, but it will have a deliciously silky mouth feel, too.

I’ve seen the technique go horribly awry, like the last ten over-crisped bacon washed Bourbon cesspools I’ve had pushed on me at various bars. My only advice for those kinds of cocktails, if you’re going to fat wash with bacon, don’t fry it quickly; render it carefully, so as not to scorch the tiny bits, and use the rendered fat along with the meat.

On the other end of the spectrum, Shawn Soole’s creation, the Grilled Cheese and Tomato Soup Martini, pushed this technique to the next level by washing a dark rum with an extra cheesy, extra buttery, grilled cheese sandwich and then muddling in a roasted tomato. The first time I read about it (last week; I was veeerryy late to the party) I immediately mixed up some Lost Spirits Navy Style Rum with a piece of grilled potato bread and American cheese. Reflecting on that masterpiece over a pastrami sandwich the next day, I got an idea… and here we are at the Pastrami Sazerac.

First, you need to fat-wash some rye whisky.

You can certainly drink the washed rye neat. It’s satiny with a nice sweet saltiness, but I think it deserves a more complex frame so let’s make an obvious decision and blend that new silky spice emulsion into a Sazerac. You may notice I left out the simple syrup. I prefer to take the pastrami sazerac in the salty, buttery direction, instead of sweet. Besides, the Peychaud’s adds enough sweetness for me. 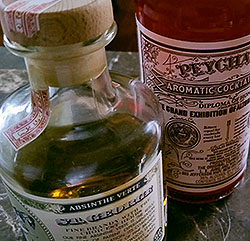