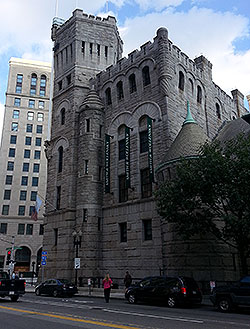 Yesterday brought us Boston’s 2013 Whisky Live event. I was lucky enough to win a set of last minute VIP tickets so I dragged one of my good friends out with me to see what the industry had to offer.

The Park Plaza Castle hosted the event, a whopping 5 hour tour de whisky. On one hand, five hours is a long time to spend wandering around a show. On the other hand, once I visited all the tables it was nice to grab another sample of one of the better whiskies I found and then catch up with some friends.

The buffet was on the small side, the live music was a perplexing mix of bagpipes playing traditional Scottish folk music and bagpipes playing Hava Nagila, but really, I came for the whisky. There were so many, too many to recount here, that I chose a few more esoteric things to judge while I explored the tables. So without ado, the official HTDW winners for Whisky Live 2013 are… 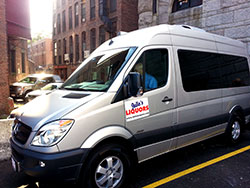 Okay, I may be a bit biased: I freaking LOVE Julio’s whisky selection. I also won tickets and a ride to the event from their whisky club, The Loch and K(e)y Society. If you live near Westbourough MA or anywhere outside of Boston city limits, you can park at the store, peruse their awesome selection of whisky, and then hop on the Bourbon Assault Vehicle for any of the whisky events they attend. Let someone else do the driving for you for a measly $10?! Yes, please! Boston can be painful to navigate for visitors, and the modest cost of a ticket covers what you would pay for parking and gas alone. 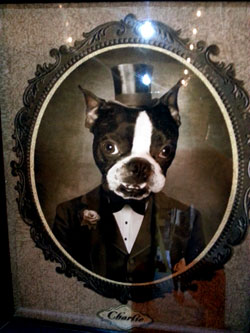 If you read my write up about my dog, David-Blackmore-kicks-ass, then you already know I have a Boston Terrier, myself. I have a soft spot for the breed, so when I saw this guy I had a good chuckle. Breuckelen Distlling’s Brad Estabrook used to bring his rescued Boston Terrier, Charlie, to work with him. Having the little guy around to keep him company was nice… that is, until the day Charlie found a puddle of some mash on the floor and gave himself a heroic case of the runs. We’ve all been there, Brad. They can be a very gassy breed. Sorry, Charlie!

I swear, if bagpipes weren’t invented to keep the British away from the Scots’ whisky then they were invented by Satan himself to enviously spite the Scots for creating something so dastardly delicious. There’s nothing like having a few drams of whisky and being forced to listen to the shrill cries of three ducks slowly being murdered in harmony. I can’t think of a more relaxing way to terrorize someone. Need a spiteful Christmas gift? Here you go!

Cards are important. A sexy business card says a lot about the person wielding it. Many people go cheap and see them as more of a utility, and it’s true that a nice card doesn’t make your product taste good, but High West knocked it out of the park with this sharp-looking wood veneer. The whisky wasn’t too shabby, either! In this case, the ambassadors and the delicious drinks went hand in hand. 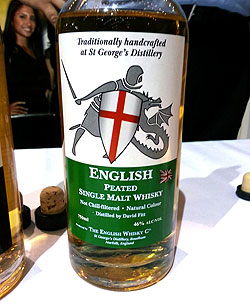 I hate using the words best and favorite. It’s so hard to place two great whiskies in a linear hierarchy. Mood, style and price can all affect one another and make it extremely complicated to say one awesome whisky is invariably greater than another awesome one. There were two at the event that really caught me, though. The English Whisky Co’s Peated St.George brought by Raj Sabharwal’s chapter of Purple Valley Imports and the BenRiach 1995 Pedro Ximenez finish brought by Federal Wine and Spirits. Sadly, the BenRiach was sold out a while ago, so Joe was just teasing us with one of the many fine whiskies his shop sees pass through it’s door. I’m not sure where to find the English Whisky Company stuff either, though the brand itself is certainly making ripples in the whisky community.

Thanks to the Loch and K(e)y Society for the tickets and free ride!