Comedy and whisky can certainly mix. Even biting sarcasm and hyperbole are fun tools to frame whisky in, but it seems like every other week I see a recycled post with a title like “X Reasons You Should Drink More Whisky”. Don’t get me wrong, I love whisky, and I hold a special place in my heart for hyperbolic sarcasm, but there are so many classier ways to help whisky’s reputation than to cram excessive consumption down our throats with cheap fratire. Bloggers and whisky champions who repost this kind of low-hanging fruit are often desperate to find new, entertaining content but too lazy to spill their brain tears and craft it themselves. 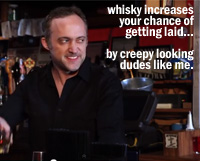 If you want to listen to douche bags misuse the word “epic” to justify ramping up your consumption while taking part in what sounds like a gender neutral push for date rape, you can watch fun YouTube videos, like this. Yes, if you have a misconception about whisky, according to the producers of this video, you apparently have “sand in your vagina”. I’d say it’s better to have sand in your crotch than rocks in your head, which is something I imagine the whisky-chugging dimwits who made this must suffer from.

So okay, the first example was clearly an attempt to be aggressively satirical towards prudish non-whisky appetites. I get it, and comedy gets a free pass despite the allusion to other half-truths in the video as if they were truly so uncomplicated. I don’t believe humorous tidbits like this actually contribute to mindless consumption, so much as celebrate that it’s already here. There is a scarier side to this type of post, though.

There are just as many people in this same vein of pseudo comedy, making very serious medical claims as to why you should drink more whisky. For instance, you might have heard from list-makers like Buzzfeed that whisky prevents stroke, heart disease, and cancer. Heavy alcohol consumption actually has a strong connection to heart disease, the number one killer of humans worldwide (number ONE!), but I’ll be sure to tell the next set of hardened arteries I see, that the deadly solvent their owners were inundating themselves with probably wasn’t the cause. I wasn’t even 18 before the first time I saw someone, my friend’s father, pass away from alcohol-related heart disease. There are also strong correlations between non-moderated alcohol consumption and cirrhosis/liver disease, brain and nerve damage, depression, and pancreatitis. What these viral bullshit bunkers conveniently leave out is that any health benefit anyone has ever found correlated with alcohol stops after 1-2 drinks in a day. Do you think the monkeys down at Buzzfeed writing this crap stop doing keg stands and high-fiving each other after two drinks? Doubtful.

The authors of these regurgitated puff pieces can hide behind plausible deniability, or claims that they’re not responsible for the world. They can decry “nanny states” or point to the links all they want, but they’re not encouraging healthier lifestyles. They’re encouraging an increase in consumption. If they wanted your heart to be healthy they would have to work much harder to write a comedic article like “10 excellent reasons your fat ass needs more exercise”.

And just in case the shining beacon of brilliant humanity that is Buzzfeed hasn’t convinced you to let go of that pesky job and turn to day drinking, even the Washington Post is in on the train-wreck of irresponsibility that’s trying to turn whisky into snake oil. Yes, the US hasn’t failed because we’ve fallen behind on education or let our poverty rates skyrocket; it’s because we aren’t as wasted as France. Clearly. Nice job, Washington Post, but you forgot the other huge reasons we’ve failed as a country: per capita, we don’t blow as many lines of coke as Spain or shoot as much smack as the UK.

It’s fun to drink and revel, and whisky is undeniably awesome. Personally, I love the stuff and I’ll be the first to admit that it sounded reasonable, maybe even funny, the first time I saw a post like that, but let’s never forget that alcohol can and does ruin lives and that people don’t really need a reason to drink MORE whisky. They need a reason to drink BETTER whisky. There should be a balanced conversation about the subject, and most of the information out there is definitely not. It’s okay to drink. It’s even okay to drink a lot if you choose to, but don’t be one of those trend-following pinheads spouting non-truths to justify your decision. Take some responsibility and own your choices.