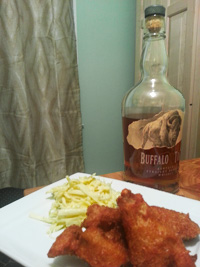 There are two paradigms people generally think of when talking about food and Bourbon: cooking with Bourbon or eating food while drinking Bourbon. I much prefer the latter, in fact, I very rarely get a good hit of Bourbon flavor when I see people trying to throw the drink into their mix as an ingredient. I almost always feel like it’s just there to sound sexy. Bourbon chocolate cake sounds like it could sell some units, but I always find myself asking, “where’s the Bourbon and why did they waste it in this recipe?”

When we’re cooking with Bourbon we tend to think of sugary things, like bread pudding, glazes, caramel or peach preserves. In these instances, the Bourbon is not being framed, rather contributing to a dish, surrendering a lot of its character to fit in. Conversely, when pairing food with Bourbon, we intend to create harmony with the Bourbon, to make it better than it would have been by itself and not squash too much of its essence. Cooking with it can mask it while pairing should frame it.

Eating super sugary things, like caramel, with Bourbon actually lays waste to the sweet receptors on your tongue, destroying any sweetness you could have perceived in the spirit and throwing the whole thing out of balance. Caramel might sound like a delicious pairing but if you’re drinking a Bourbon after a big hit of it, you’ll find a sour, bitter mess in your glass. Not that a little sweetness is completely uncalled for, just don’t go overboard. You need to temper your sweet with a heavy dose of creamy, savory, perfumed or bready.

Carrots, parsnips, pretty much any sweet and earthy root vegetable, when prepared correctly, play nicely with Bourbon’s perfumed and savory side. Mayonnaise is just about as mouth-coatingly creamy as you can get. Fried foods work to the bready ends and, using meat as a vehicle, mingle a little in the savory side as well. With this in mind, the toasted batter on savory wings served with a side of creamy celeriac slaw are all begging to be served with a few fingers of heady Bourbon.

There are a few day-before preparations to attend to in this recipe. Chicken fries best when it’s had lots of time to dry out, and giving the salt lots of time to absorb into the meat will not only help keep it juicy, but helps make the outer surfaces dry and fry better, so don’t skip these steps or you could end up with soggy, flavorless wings. The  most difficult part for the celeriac slaw is making your own mayonnaise, which you could just as easily skip, but I love the flavor of homemade mayo; making your own is a skill any good cook should have under their belt.

Plate wings with a dollop of slaw, serve with a nice heady Bourbon, like Buffalo Trace, Johnny Drum or Noah’s Mill on the side, and enjoy!