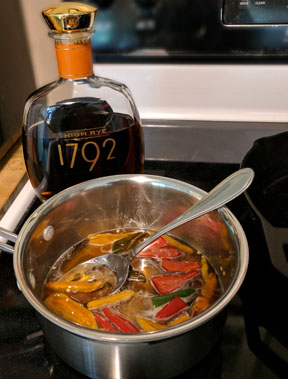 Twitter… man… what the fuck happened to Twitter, amirite? We need more stories illustrating Twitter can be good sometimes, when they’re not giving a platform to some of the dumbest muthafuckas on earth.

So a random stranger on Twitter told me about hot honey the other day. If you’re like me and had never considered it before, well, it’s going to change your life. Especially, if you still have a freezer full of the summer’s hot pepper harvest.

Slather it on your barbecue like a sauce, glaze roasted chickens with it, powder it and sprinkle it on buttered popcorn, use it to blind your enemies (your now deliciously spicy enemies, mmmmmm). The possibilities are… well… they end somewhere, I’m sure of that.

I added a splash of whisky in the mix because I think the guy forgot to mention it. His recount of the recipe was kind of like, “guys! boil your peppers in honey!” so he left a few things to the reader’s sensibilities. I chose this perky 1792 High Rye, to add a tannic depth and round out some of the sweetness with some spice, but I’m pretty sure this would be great even without the whisky.

At the end of the recipe, I also recommend straining the peppers out because you can let them dry on a parchment and make dastardly, candied habaneros that when chopped will change your ham sandwich from blech to holy bleFTHFTHFTHISISFUCKINGAWESOOOOOOOME!!!!!!!

Please note: I’m not a food scientist. The honey should preserve the peppers, assuming they dried out enough during the steeping process, but I like to err on the side of caution here and just take them out. Some people leave them in to be fancy. If you feel like being fancy, I say hot glue that fanciness to the outside of the bottle where it can’t ferment into noxious flavors!

1.) De-stem and de-seed 2-6 habanero peppers. You can chop them if you like, but it really doesn’t impact the flavor much. You can use more peppers, as well, or a mix of any chili types you’d like. I actually used a bunch of different peppers from my garden.

2.) In a small saucepan, add the peppers, liquor, salt, and enough honey to cover (about 2 cups). Heat over medium-high heat until peppers just start to let little bubbles out. Immediately turn the heat down to low and gently steep without boiling for about 90 minutes.

3.) Strain the peppers out and reserve on a sheet of parchment paper until dry. If still goeey, dry in oven at 200*F for a few minutes. Move the honey to a clean jar and if not using within a week, store in refrigerator.