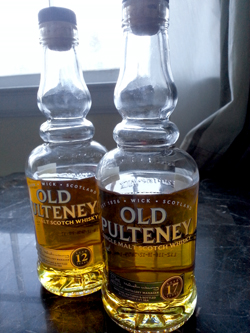 Random Trivia: Sir William Pulteney, the wealthy, Scottish lawyer for whom the neighborhood and later whisky were named, married his first cousin. That’s a little weirder than Rudy Guliani who accidentally married his second cousin but not nearly as weird as Jesse James, who married a first cousin who was, literally, named after his mother. Okay, shake it off; we have some whisky to drink!!!

These were part of a gift pack, two 375mL bottles. I wish more distilleries would offer packages like this to try their wares. I also wish that this pack came with a sample of the 21 year. These are both in the same vein as Royal Lochnagar and Balblair: not a whole lot of Pendunculate cask influence, with lots of juicy pear, sweet vanilla and coconut, but unlike those other two, Old Pulteney releases can be peppery and dry once you taste them. They would pair fantastically with pear cobbler. These would also go well with a cheese course or a savory dessert, but I would avoid spicy hot foods or the drying palate may start to make things unpleasant for you.

Nose: Orange cream sherbet. Dry stone and Nori with ocean spray on a sun-drenched afternoon. Apples and raisins with oatmeal. Cocoa Puffs. A slippery sweet malt with a little bit of pineapple, thyme, nutmeg and ginger powder. Barbasol, mango and black pepper. After a while I find Top Ramen chicken flavor spice packs. When the remnants dry in the glass it leaves you some milk chocolate. This one makes me want to buy a green van with a bed in the back and drive to Colorado with my wife and dogs. I would have a handsomely neglected neck beard by the time we arrived. There would be pie… and kites.

Palate: A little astringent and very drying, like the shaving cream from the nose. Wintergreen. The dryness that sticks around and coats my tongue is overwhelming at first and, really, my only reservation about this dram. Apple peels. A little bit of key lime. Black pepper. Fermented mash in the finish tags along with the dryness.

I like this one a whole lot more in a snifter than a Glencairn.

Nose: The very first note on a virgin bottle pour brings me a backpack full of yellow-lined paper, unfinished homework and chewed pencils. Asian pear and candied lotus root are next. The sea air is fresher. Celery. Ricotta and almond. A little funk. A little Vapo-rub.  The stone has turned to snow melt. Bolder, not as dry and the sweetness is better balanced in here than in the 12. The apples turn into a walk through an orchard.

If you prefer the grimy whiskies of Islay, or the bold perfumed Ryes of the US, or even the spicy sherried drams from Speyside, then this sweet malt-pear style may not suit you in the 12. The sloppy wetness of the 12’s aroma can’t compete against the palate’s dryness there, but balances out with some extra fruit and funk in the 17 year release. I much prefer the older of the two but wouldn’t turn my nose up if offered either.