How is there ever a line at Chick-fil-A?! There are only, like, three things on the menu. It’s so simple, those bible school dropouts manning the drive through should be shooting them out of fucking cannons. Nope! 30 minutes for a sandwich and half the time it still ends up being soggy even though you clearly waited for them to finish murdering and feathering the chicken to feed you a fresh patty. Assholes!

Really, that’s what I get for planing my day so poorly that I need to quench my morning hangry with fast food. I’m usually super early to all my commitments. In that respect. I guess it’s fortuitous that I was running late last week, because I realized something: Chick-fil-A and whisky are a home run. Even the occasional, inevitable, soggy-because-I-was-made-by-human-garbage sandwiches are pretty good when you’re chasing them down with a belt of whisky. It’s like a reverse pickleback. Try it!

This one ain’t bad!

Nose: The first time I tried Westland someone poured it for me blind. I couldn’t wrap my head around it and was thoroughly convinced it was a Scotch. This nose here is no different. Very nutty, a little peaty, whiffs of ocean and dusty barnboard. Very Scottish but with a strange, romantic note that it’s hard to put my finger on; a secret ingredient, like fish sauce, that changes the dynamic of the flavor without letting on to the source.

Palate: It’s got all the coffee and roasty malts that the American Whisky has, but the youth gets a bit trampled by the peat which ends up balancing things out. The finish is great!!! It’s not well-aged but again the peat comes to the rescue and makes everything seem richer. Not a super complicated whisky overall, but solid and very easy to dwell on.

Now, before people send me an imperial shit ton of hate mail about how I should be nicer to Chick-fil-A, you should know I also dislike NASCAR and think people who don’t put cheese in their grits are animals, but if you have any favorite fast-food/whisky pairing leave them in the comments below! Cheers and happy eating!

Thank you to the team over at Westland for the samples! 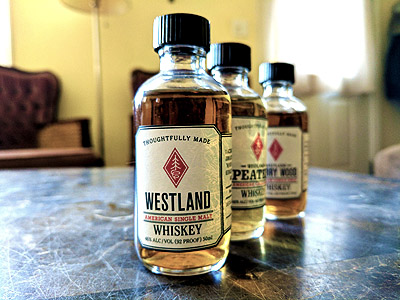 Last night I dreamed that cars had been replaced by flying, plexi-glass bubbles. The engines worked on a principal that only made sense in sleep, but one of the fun side-effects of the process was that the accelerator acted exponentially.

As long as the pilot kept their speed down and only accelerated in small, reasonable increments then the pilots would be fine. Every so often a person would be in a hurry, or sneeze, or simply make a bad decision, and jerk the accelerator too quickly. Recklessly approaching the asymptote of the rate of acceleration would shoot the pilots forward at unfathomable speeds, placing them so far away in a split second that they would likely never be able to turn around and accurately direct back to earth.

Whether this was an intentional design to subtly remove the most dangerous drivers from our travel-ways or an unavoidably cruel reality of the physics behind the device was unclear. I’m still not totally sure how I feel about people in a senseless rush randomly flinging themselves mathematically impossible distances through space… but my gut reaction is to chuckle in the most detached way possible. I wish whisky had a fail-safe like that, sometimes. “Oh you’re looking for a quarter cask because you don’t want to wait for a full size cask to mature?” *FLING*

Maybe we wouldn’t fling the distillers and their loyal retailers into the cold, dead vacuum of space… maybe just a quarter mile or so into the ocean. Just terrifying and far enough to teach them a lesson. Unfortunately, prepare for heartbreak, that’s not actually how whisky works.

The hyper-inflated craft-whisky scene seems to draw its biggest crowd from innocent people trying desperately to understand what all the fuss is about. I assume its next biggest crowd is people who don’t understand either but will tell you they do because they have money in the game. Fortunately, there are exceptions to this grim conspectus. For the next few posts we’ll talk about a contemporary, American distiller that seems to be eschewing the craze for small casks, staves, or fancy machines. Westland Distillery of Seattle, Washington.

I’m not going to wax poetic the entire time. It’s an ugly business and I’m not a huge fan of this flagship Single Malt. Not at the $60-70 which it seems to be retailing for. Not at two years old and definitely not in this format. Don’t let that detract from the fact that I’m a huge fan of what the distillery is doing. Stay tuned for my next reviews, a few other Westland malts, because this bottling is a poor example of what they’re capable of. Please don’t think the American Whisky is undrinkable, either, despite that I believe this is one of their worst offerings.

Think of that as good news! If you enjoy this one more than I do, which there’s a good chance you will, then you’re going to love the rest of their stuff as much as I do and it’s only going to get better.

Nose: It begins beautifully, like a classic, unpeated single malt Scotch. Malty and floral turns over to a dry, overpoweringly nutty hazelnut. Westland uses a lot of different roasts of malt, a few of the more heavily roasted malts account for the darker flavors. It’s very much an unrefined, beastlier version of Glenmortangie’s Signet, with coffee, dried orange peels, figs, and slightly burned chocolate. If they used a more delicate hand with the heartier roasts and aged it a little longer in the cask, I think it would be hard to drink anything else.

Palate: It tastes a lot younger than the nose lets on, at first. Loads of grain contributions. Carmelized sherry syrup, freshly washed coffee grinds, raw cocoa, and dusty canvas dominate all the lighter flavors. You can find a lot of apricot and orange peel, but with every other flavor shouting in your face it doesn’t go far enough to balance it for me. It has a slightly tangy finish, kind of like a well-aged rum. The palate really struggles to pair the nutty, roasty aspects with lighter notes, but I suspect cigar smokers wouldn’t notice or mind.

A bit pricey for me at the moment, but the payoff is definitely coming! This bottle is kind of unique in its category (American Single Malt) in that it doesn’t totally suck ass. Hurray!!!

Notice: If you’re a smoker, then disregard my TRY IT and consider this a strong RECOMMEND!

Thank you to Westland Distillery for the sample. Cheers!