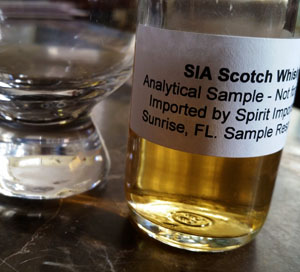 SIA brand owner, Carin Luna-Ostaseski, began her journey as a hobbyist in her own kitchen. Satiating her curiosity by blending different whiskies from her personal whisky shelf, she began to understand how they interacted to create a new spirit; whiskies like mild, grain forward Auchentoshan; monstrously peated, umami Ardbeg; sweet and peppery Old Pulteney; malt forward Oban; all came together in her first trials.

Blending itself is infinitely complex. You’d think it was just measuring a little bit of reagent A and a little more reagent B into a jar, shake, and you get what you get, but there are so many more variables.

Proof alone can change a whisky from abrasive to delightful. Some get watered down and turn bitter or lose their edge, while others can open up and become deliciously fruity. Like how homemade soup is always better the next day, alcoholic mixtures marry and change over time in a phenomenon called “bottle shock,” as well. This means that the immediate product you smell or taste can be dramatically different after being left alone for a few days.

Often times these transformations are as difficult to understand as our own sense of smell. Blending is an art; a labor of love; an amorphous equation that eludes simple mathematical explanation. Factor in differences in each single cask along with age, proof and shock, and suddenly, making a whisky uniform, batch to batch, is no small feat… but Carin marched on.

After witnessing one of her friends start her own alcohol label on Kickstarter, Carin saw her own potential laid out before her. She got to work hosting tastings, conducting market research about what people liked and didn’t. She learned that the first impression was most important; if the nose isn’t welcoming, the consumer is less likely to take the first sip with an open mind and less likely to enjoy the experience overall. She found combinations people seemed to love, and some they hated. In true San Francisco spirit, she pushed on, arriving on the furthest coast, a consumer turned entrepreneur. Thus, she cut her teeth the old fashioned way, with lots of hard work, painstaking attention to detail and steely resolve. Her perseverance paid off and her journey culminated when a Kickstarter campaign to launch her brand brought in an impressive $45,784 (almost seven grand over her projected budget!).

With capital in hand, she settled on a profile people seemed to enjoy, tested it some more, and then shipped off a sample for Douglas Laing & Co. to try and recreate. They sent her several samples back and once they settled on the one they both felt was perfect, production began. The end product, a “proprietary mix” of distilleries’ whiskies ranging from 5-9 years in age, 40% of them malt and 60% grain.

Nose: Mild and approachable. There’s a calm peat resting faintly in the back. Sharper, malty notes slowly set in next. Freshly cut mushrooms and tomato glutamates. Hay and chocolate steeped in black coffee and then left to dry in the sun. Everything is in balance but a bit muted overall.

Palate: Gentle at first, like an ice cube just melted in your mouth. A peppery cinnamon slowly rises next. Peat peeks in with some vanilla phenols: “I love you, Vanilla!” it cries, “Will you marry with me? I know just the vatting.” To which Vanilla whispers, trembling, “Yes,” before calling its blended, milk chocolate mother.

There’s a lot going on in this whisky. It’s not very bold and the proof is on the low side, so the complexity can be easily overlooked, but the longer I spent with the glass, the longer I found new corners of it to explore.

It’s a sunny, rounded, easy-going drink and an obvious recommendation from me that should quickly appeal to the average non-geek. At around $55 a bottle I’d like to see the price come down a little, but this is obviously a small company so the price will hopefully move in a favorable direction as Carin brings this awesome new start-up up to speed.

Thank you, Carin, for the sample!