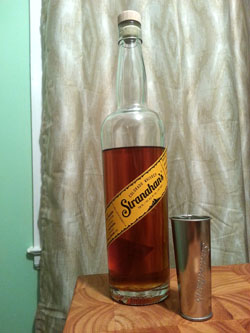 Before the distillery was officially founded, George Stranahan let Jess Graber use his barn to experiment distilling his whisky. At the time, Stranahan was not only a bootlegging accomplice, but owner of Flying Dog Brewery, so Graber began distilling leftover kegs and any odds and ends he could get Stranahan to give him. Eventually, Graber “crafted his own recipe from barley” and tasked Flying Dog to brew it for them, essentially outsourcing the mash he would use for his whisky.

The official distillery was founded in 2004 by Graber and Stranahan. Graber quickly brought amateur distiller Jake Norris into the fold to help with production as a minority partner. In 2007, Flying Dog moved to Maryland so Stranahan’s switched to Oskar Blues for their wash. Two years after that, they bought a new space and started making their own wash. Finally, in 2010, Graber sold the whole thing to Proximo spirits. Norris was the last of the trio left working the floor when he departed in 2011. He’s hinted in interviews that he has a side project he’s planning, but nothing has surfaced yet. Thus concludes the journey of Stranahan’s Colorado Whiskey from craft to corporate in six short years.

Knowing the genesis of this brand, I suspect there are some hops in the mash. Flying Dog makes a lot of very hoppy brews. Proximo is notorious for its reluctance to comment, though the official reply I received from Stranahan’s very plainly denied the addition. The website claims it’s “straight Colorado whisky”. If it were straight whisky, that would rule out any adjuncts like hops, but the only declaration on this bottle uses the word straight to describe where it came from, “straight from the Rocky’s,” and I have a suspicion that the word Colorado in between straight and whisky on the website may provide them disingenuous cover, as well.

Nose: White wine, dry cave and hops over a malty base. Given lots of air there’s evidence of a beautiful single malt in here. Sliced almonds and raspberries. Woody like a Bourbon. Slightly under-dried apple chips. Socks and boiled egg whites waft in between milk chocolate.

Palate: Hops dominate all for the first few moments before retreating to offer a little footing for traces of other flavors. IPA on the middle of the tongue and stout in back. Bright with bitter grapefruit, cola and heaps of ripe apples. Numbing. A little of the chocolate in the finish implies there may be some darker roasted malt in the mix.

I love the nose but find myself less enamored with the palate. The roar of its cult status is hard to muffle, though. It doesn’t suffer from lack of character but I’ve had much better bottles. I do find it strange that WhistlePig receives so much criticism for being 10 years old and costing upwards of $60, while Stranahan’s rolls in with no age statement and a verbally marketed age of 2-5 years for the same price without commotion from the peanut gallery.